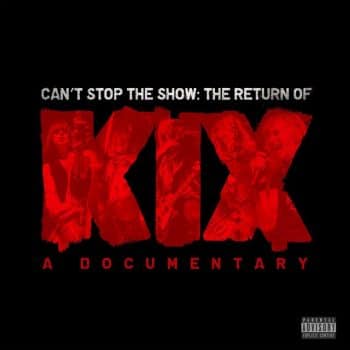 Review:
Kix came roaring back in 2014 with Rock Your Face Off — a fitting title as the album did in fact ‘rock your face off.’ What was interesting about the album was that singer Steve Whiteman for years went on record that Kix would continue on as a tour entity only. This was mainly due to the fact that key [okay only] songwriter and bassist Donnie Purnell was left out of the reunion and the band enlisted bassist Mark Schenker who was a long-time friend of the band.

Schenker became the perfect surrogate for Purnell as Schenker took over bass duties and wrote songs. This leads us to Can’t Stop The Show: The Return of Kix, which is a documentary not about the history of Kix; but rather a documentary on the reformation of the band and the recording of Rock Your Face Off. Not exactly what I was expecting. I was assuming it was retrospective but that would have been to obvious.

Can’t Stop The Show: The Return of Kix captures brilliantly Schenker’s urging of Whiteman to finally gave into recording new music. It was under Schenker and producer/song writer Taylor Rhodes’ (Aerosmith, Ozzy Osbourne, Y&T) direction that Whiteman, guitarists Brian “Damage” Forsythe and Ronnie “10/10” Younkins, and drummer Jimmy Chalfant began their journey entering ‘new territory’ — writing a record without Purnell. There’s no dramatic moments, no ‘acting’ for the camera by Kix.

Can’t Stop The Show depicts a group of ‘friends’ coming together for a common goal and doing so with the utmost respect for one another and having a really good time doing it. There’s number of cameos in the documentary by several of their contemporaries, radio DJs and the like; but the spotlight should be on the band in this terrific film. If you’re a fan, it’s a given you will adore Can’t Stop The Show. However, the film does have the potential for appeal outside of the band’s core fan base. As an added bonus, there’s live performance clips and an audio CD of a dozen live [career spanning] Kix cuts.

Kix‘s “Love Me With Your Top Down” video:

KIX Love Me With Your Top Down (Live) taken from CAN’T STOP THE SHOW: THE RETURN OF KIX