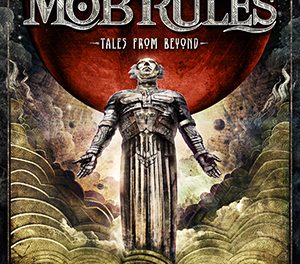 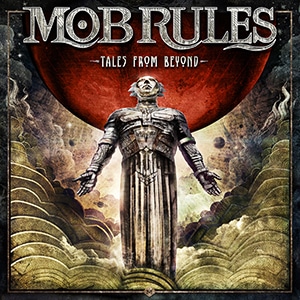 TALES FROM BEYOND
Released on March 18, 2016 (Steamhammer/SPV)

Review:
I discovered Mob Rules in the mid-90s, back in the golden days of the Limb Music record label when Sascha Paeth and Miro (Michael Rodenberg) were performing production duties for almost every release. I enjoyed their first two releases — Savage Land and Temple of Two Suns — but lost track of them after that. Until now…

I confess that prior to this review, I hadn’t revisited those two early albums from Mob Rules in a long time, probably since the early 2000s and I was somewhat excited to listen to Tales From Beyond and then go back to them.

Unfortunately, those prior albums wrent as good as I remembered them and in the end, I have mixed feelings about Tales From Beyond. The album opens strong with “Dykemaster’s Tales” and “Somerled” but soon after begins to lose steam until it regains some of it at the end. The main problem here are the vocals. Klaus Dirks is Mob Rules‘ weakest spot. His voice is just not melodic at all and his range doesn’t help make the different parts of the songs stand out.

These guys have been doing heavy metal for over 20 years. Their ability to perform is not in question but in the end, the songs blend into each other without a discernible difference. I couldn’t tell one from the other right now and I’ve listened to the album more than a dozen times. For me, it just lacks catchy choruses, melody and vocal harmonies. It’s all too flat.

Still, there are good songs here. The aforementioned opener “Dykemaster’s Tales”, the surprisingly melodic “My Kingdom Come”, and the last three songs that together construct “A Tale From Beyond” and that in conjunction work pretty well.

Tales From Beyond is not bad but doesn’t stand out either. In a world overcrowded with heavy/power metal bands and with the plethora of options available, I don’t feel that it’s worth pursuing anything but the very best. After revisiting Mob Rules‘ earlier albums, I can safely say that this is pretty much a continuous effort from Mob Rules. If you’ve liked their past albums, this one offers more of the same and you should get it. If not, there are other better options out there.

Taken from the new album “Tales From Beyond” – Out March 18th 2016!More infos and tour news: https://www.facebook.com/mobrulesbandVideo created by: www.s-fx.de