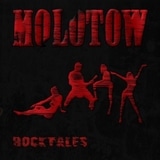 Review:
“It sounds like a million bucks to me”. That line from the song “Scream” may seem like bragging, but in the case of Norway’s Molotow it is right on the money. It’s been a couple years and line-up changes since these guys first burst onto the scene with feat. Rock & Roll and now they have returned better than ever.

As good as their debut was, this CD ups the ante a bit more. If you are a fan of slick hard rock, with great choruses and roaring guitars, then Molotow is the band for you. I originally compared the band to Crazy Lixx and I’m going to stick with that comparison as both bands play some of the most infectious rock released these days. You don’t believe me? All you have to do is check out “Scream”, “Bad Reputation”, “Overdrive”, “Rocket Scientist” and “Riot” for proof.

There is a line in “Rocket Scientist” that pretty much sums up this entire CD, “this is high class rock and roll.” And that is exactly what Rocktales is, high class rock with killer guitar lines that seem to drop out of the sky. The band really does capture an over-the-top sound, rocking harder than ever while maintaining the qualities that made them so exciting in the first place. I am impressed, and not just with the musicianship, but also with the energy, production and song quality – and it all comes together to produce an excellent ride down memory lane.

Whereas Molotow‘s debut album faltered on the second half, Rocktales delivers the goods from beginning to end. It may have taken a couple of years, but there is no denying that these guys have hit their stride. The only thing I wonder about is how they are going to be able to top this release? That in itself will prove to be a monumental task as Rocktales is very close to a flawless piece of hard rock.