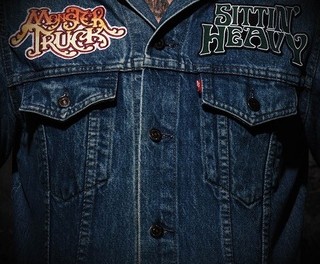 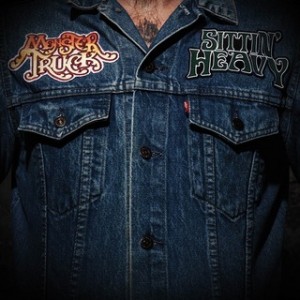 Review by Metal Mike:
“Why are you not rocking?” Before getting into Sittin’ Heavy, I took the opportunity to revisit their 2013 album Furiosity. A solid record to be sure, with songs such as “The Lion”, “Sweet Mountain River” and “Old Train” all of which make it into my mixes quite regularly. It is great, straightforward hard rock from this band from Hamilton, Ontario, Canada. Furiosity even won Monster Truck a Canadian Juno Award for “Breakthrough Group of the Year” in 2013. Richly deserved, and they are now continuing their legacy with Sittin’ Heavy.

Sittin’ Heavy is similar to Furiosity… the same sound and fury, but perhaps a little more mature in the sense that their songwriting and lyrics have improved since their last effort. The album’s first single, “Don’t Tell Me How to Live” (see video below) is really two songs in one…. killer guitar and rhythm groove in the verses, with a soaring, anthem-like chorus. The video itself is even more impressive. Filmed on a quarry rig in the rural town of Caledon, guitarist Jeremy Widerman commented, “When it comes to music videos, it seems that the bigger a pain in the ass it is to film, the better it turns out. Between an improbable five-story industrial load-in and numerous warnings that the drones’ flight path was too dangerous, the entire video shoot balanced on knife’s edge.”

The first few songs are flat out driving music — heavy and catchy — including “Don’t Tell Me How to Live.”  “For the People” is where Monster Truck breaks away from Furiosity and expands their sound. I can describe it as Monster Truck meets the Sheepdogs cross-bred with Guess Who and Lynyrd Skynyrd. Southern rock with a tad of country in the vocals but don’t let that turn you off. It works. In fact, the more I listen to “For the People” — the more hooked I am on the song. “For The People” also features Ian Thornley from Canadian hard rock band Big Wreck. Monster Truck uses its organ and keyboard aggressively, bringing it out in the mix. Tracks such as “Things Get Better”, the mid-tempo “Enjoy the Time” and the moody “Black Forest” all have a vibe to it that’s a little different, but works within the context of the whole album.

I’m a fan of Monster Truck, and I like where they’re going with Sittin’ Heavy. It’s an improvement on Furiosity, but just enough to remember their roots while still testing the waters with newer sounds. Pick it up if you get the chance. You won’t be disappointed.

Review by Boppin:
This album is the one I could not wait to get. I had to make sure I got it the day it came out. I ordered the coloured version, and was not disappointed. Two big heavy slabs of green and white marbled vinyl — even if they did not sound awesome which is not likely, at least they would look awesome! So let us, as Haywire once said “Drop The Needle.”

“Why Are You Not Rocking?” — I always ask myself this question. Mere seconds into the song, I realize I am rocking, and so is Monster Truck. The song starts off with the spoken words “All right. Good to go.” before kicking in with pounding drums and some amazing fuzzy guitar. The chords here are enough to make any sludge metal shredder jealous. “Rock and roll might save your life. It might save your life tonight.” No truer words have ever been spoken.

“Don’t Tell Me How To Live” — The album’s lead-off single has been heard here in Canada on the radio for a while now. Even though I have heard it many times, I still love it every time. This to me is the sign of a great song. It never gets old.

“She’s A Witch” — More fuzzy guitar to begin this song. This seems like a bit of a new direction for Jeremy Widerman. His guitar work has always been top notch, but adding that fuzz that I love has put him over the top. As I said in a previous album review, I have a thing for witches. Just making a song about a witch has me hooked, but the vocals and the instrumentation keep me on the line.

“For The People” — Ian Thornley has a guest spot on this song. Most Canadians will know him, but for the uninformed, he is the lead singer of the bands Big Wreck and Thornley. He has a ton of cred in our music industry, and it says something for a band to be able to lure him in. His slide guitar lends well to the theme of this song, which has a bit of southern rock and maybe even a tiny shred of country mixed with classic rock. If Steve Earle, Ry Cooder and the Doobie Brothers had done a song together, this is how it may have sounded.

“Black Forest” — Side B of the first platter starts off with thunder rolls. Sorry Garth Brooks fans, I mean actual thunder sounds. Then Brandon Bliss shows us how an organ can be an integral part of a hard rock song. Not in an annoying Ray Manzarek kind of way either. Light tapping of the cymbals chime in for a neat mix before the guitar starts to wail. Jon Harvey‘s vocals here have a bit of a Chris Cornell sound to them, and just enough of a change to make the listeners’ ears perk just a bit. The vocals aside, the song has a later Soundgarden feel to it.

“Another Man’s Shoes” — I am not sure if it was intentional or not but the song has a little of Monster Truck‘s “Sweet Mountain River” from their Furiosity album to it. Either way, it is a good thing because that was a great song. This song doesn’t have the instant charm of the aforementioned song. However, it does have something as in great guitar, pounding drums, and powerful vocals.

“Things Get Better” — Wait a minute. I know that piano intro. Guest pianist Anthony Carone must be a big Dolly Parton fan as he seems to have found a way to mix 9 to 5 into a rock song. Well played fine sir. A few seconds in when the guitar and drums sound off, you know this is no country music/soundtrack song though. This is a rocker through and through. The repeating chorus is a highlight of this song.

“The Enforcer” — This song starts off with hockey goal horn. The song title refers to the players on the ice whose job it is to protect the smaller players. “Before you drop the gloves, say bye to those you love, and those teeth you remember.” The background chants in this song actually give the impression of hearing a cheering crowd at a sporting event. I guarantee this song will be soon heard in hockey arenas worldwide. It really is a good romp.

“To The Flame” — Steve Kiely begins the second disc by pounding the drums into submission while the guitar wails. The slower vocal delivery emphasize the fear and desperation of the person being hunted down in the song.

“Midnight” (bonus track) — As if the coloured splatter deliciousness that is the vinyl LP isn’t enough to shell out the extra money, then the fact that this song is only available in this format should help make your decision for you. It is a true rocker, and the guitar work here does seem to be just a little different than others on the album.

“New Soul” — Rhythmic drumming helps the listener know exactly how and when to bang your head along. Make sure you are in welcome company when listening, because not everyone will welcome your air guitar hero impersonation.

“Enjoy The Time” — This song features a who’s who of Hamilton, Ontario, Canada. Terra Lightfoot and Brad Germain (formerly of Marble Index) team up for the background vocals here. Since Hamilton is the home of Monster Truck, it is nice to see they chose to include fellow Hamiltonians. The keyboard work in this song is supreme. It is a throwback to the heydays of the 1970s. It’s an amazing album closer, with all parts blending into a really, really great song. I am kind of sad to get to the end. I guess all I can do is spin it again. The album closes and it started with spoken word, basically saying “It’s Over. That’s It.”

I am so glad to finally see a complete Monster Truck album. The previous EPs and album were great, but had just a tiny bit of good songs mixed with mostly great ones. This album is awesome from start to finish. I am happy to see them moving upward to eventually being a worldwide phenomenon, even if the days of me seeing them in a sweaty bar with 100 or so people are long gone. Welcome to the big leagues Monster Truck.

Reviewed by Metal Mike and Boppin for Sleaze Roxx, February 2016

Monster Truck – Don’t Tell Me How To Live (Official Video)

Official music video for Monster Truck’s single “Don’t Tell Me How To Live,” from the album Sittin’ Heavy – out February 19, 2016 on Dine Alone Records.PRE-O…