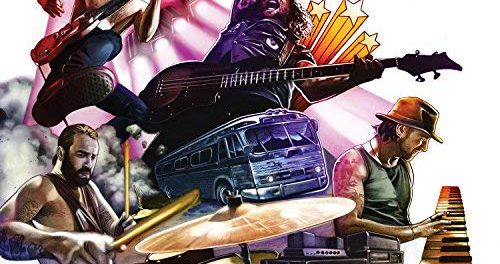 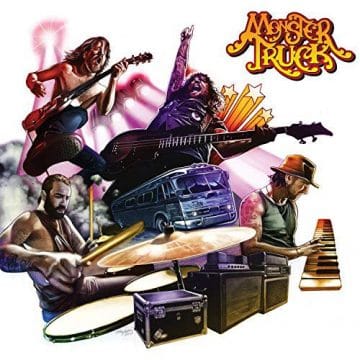 Review:
Monster Truck has been a favourite of mine for years, going back to their first release Furiosity in 2013. The four-piece from Hamilton Ontario Canada has been a force to be reckoned with for years. Much of the band’s output has been referenced in the previous Sleaze Roxx review of Sittin Heavy, so I will spare the background, suffice to say these guys know how to lay it on.

I have always been a big fan of Monster Truck. Over their three albums, there is a consistency. The use of powerful vocals, heavy guitars, and decent hooks make for a full experience worth a listen. Without a doubt, True Rockers carries on that legacy. Dee Snider provided vocal support for  the album’s opening track “True Rockers”. It works hard on a powerful guitar line, and breaks down into a singular sermonesque philosophy….

We all gathered here today to pay respect to rock ‘n’ roll
To testify that we are true rockers
‘Cause rock ‘n’ roll is not dead ’cause it lives in our hearts
Show your true colors, show everybody you know
That rock lives in your soul and we ain’t never gonna let it die
I wanna see you all head banging, hold fists to the sky
Cream at the top of your lungs, “I know who I am,
I know what I stand for, I am a true rocker” Let me hear you say it
Raise your voices in praise and as long as we still breathe
Rock ‘n’ roll and we’ll live forever
And if you believe that we’ll never die, we will never die
Now scream!

That’s pretty cool, I think. It kind of defines all of us like-minded fist in the air fans of real hard rock. It’s followed up by “Thundertruck”, which is fabulous. This song mixes ’70s arena keyboards with modern dirtcore verses, accompanied by euro-metal melodic choruses and a fade out gang vocal, “all we want is to thrash our faces off like it’s 1985.” OK, so Monster Truck is not exactly thrash, but at least they appreciate the genre.

“Evolution” was the band’s second release, and the biggest so far on rock radio. That makes me sad. Every time it was played, I had to remind myself it wasn’t Nickelback, and that there must be better album cuts. Wow, not sure why they would choose this as the True Rockers‘ selling point. I also have an issue with “Young City Hearts.” It doesn’t fit, and to me, it reflects adult album alternative, like Imagine Dragons with more distortion. But, beyond those two tracks, I’m totally invested in True Rockers.

“Devil Don’t Care” is a bluesy groove with neat harmonica and organ stabs. The vocals and guitar work are genuine to the blues genre, even if the song gets a little back-end heavy later on. At my age, there’s something about “Being Cool Is Over” that appeals to me. The idea is to be your own rocker. Screw “dad rock” Monster Truck is fighting the stereotype.

Carrying on with the bluesy theme, “Undone” has some great musicianship, and compelling lyrics.  Almost a ballad, it works as a slow burn and develops nicely. It reminds me of Kim Mitchell, with a floating guitar line, and almost melancholy delivery. “Denim Danger” is the closest True Rockers comes to an anthem like “The Enforcer” from Sittin Heavy. “Hurricane” is well syncopated and a pretty cool tune. Finally, “The Howlin’” begins as slow and thoughtful, but works itself into a very well done mid-tempo track complete with organs and guitar solos.

Monster Truck continue to evolve and create great new music. This band is one of Canada’s best at this point… while touring heavily in Europe for most of the fall. Local bias aside, I’m confident in recommending this band. Not exactly sleaze as in L.A. Guns, but more like a modern power arena rock.

Official video for “Evolution” by Monster Truck. From the new album “True Rockers” out now!Listen now – http://smarturl.it/Monster-Truck-Digi Released by Di…