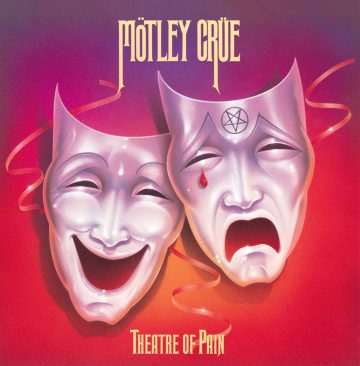 Review:
Aaaah, the eighties — a wild, colorful, fun decade that ushered in the mainstream arrivals of music videos and video games. A time when the lines between just about everything were blurred and topped off with mad crazy colors for miles! A decade directly responsible for everything from hair metal to the eventual response of grunge to even this website. And throughout the whole dang thing Mötley Crüe rose from the stenchy side of the Sunset Strip to become the self-proclaimed “Saints of Los Angeles.”

As an import crazy kid well before metal mania took over most teens in America, my ears were blessed and battered by the bubbling sounds of hard rock in the late seventies and early eighties including the Crüe self-produced single. I absolutely loved the rawness of Too Fast For Love and the riff-heavy anthems of Shout At The Devil and when Theatre of Pain landed in 1985, most of my pals just assumed that my seventies glam and bubblegum loving self would totally lose it over the band’s more colorful look and sound. Yeah, at first a lot of guys were kind of put off by the switch from black leather to the more brightly clad Crüe and even more stumped by some of the more hooky sounds. Heck years later, even main writer Nikki Sixx called Theatre of Pain “a pile of rubbish” and while I wouldn’t go near that far, for me it has always lacked the balls and energy of the majority of the Crüe‘s other studio albums. That being said, while it might be my least fave of the band’s eighties records, it’s still filled with some pretty kickin’ Crüe classics, even if they are a bit on the polished side.

Hitting the studio in early 1985, it’s actually a wonder that the Crüe even managed to pull it together long enough to record Theatre of Pain but maybe it was having to get it done that kept the band from totally imploding. With singer Vince Neil facing time behind bars for vehicular manslaughter coupled with Sixx‘s heroin addiction, it was left to returning producer Tom Werman to try and reign it all in. Despite Sixx aiming his negative opinions on Theatre of Pain firmly at the heavily successful producer, it can be argued that without Werman‘s additional focus, the band might not have even made it through the recording process. Even so, with an uncertain future regarding their singer, the band found a glimmer of solidarity in working together on what would become their third record which is far more than could be said of the group dynamic just five or so years down the road.

When Theater of Pain landed in June of 1985 I was at my own crossroads and while nowhere near as intense as what the Crüe were going through, in my brain just as trying. Up to this point life was a rock and roll walk in the park but bad decisions and a few unlikely choices left me staring up out of a seemingly impossible to climb out of hole. If anyone needed a soundtrack filled with tunes far edgier than the Crüe‘s Theatre of Pain it was me but even in the glossed down, vamped up presentation of it all I found worthy pieces of escape even if it was a loud blast of high volume angry venting I needed. With that in mind, there is still a pretty good bit of angst-filled anthem goodness especially in some of the album’s “deeper” cuts.

While Theater of Pain will always hold a place in popular culture thanks to the massive singles / videos for “Smokin’ in the Boys Room” and “Home Sweet Home”, for my dough the best part of Mötley‘s third album lies in the more classic Crüe sounding tracks. “Louder Than Hell” (a reworked leftover from the Shout At The Devil sessions) kicks off with reverb heavy spanking drums, Vince yowl, and those razor riff guitar chords that fans fell in love with on the band’s first two records on songs like “Too Young Too Fall In Love.” With spot on Vince vocals tearing over chunky stop and go crunch chords, “Tonight (We Need A Lover)” gives a sing-a-long nod to those earlier releases as well while “Fight For Your Rights” is classic Crüe crash chord anthem material and “Use It Or Lose It”, a double bass smoker of a track, that while perhaps lacking in substance, is maybe my fave all out rock track on Theatre of Pain.

Now few would be surprised if Sixx and company increased their female fan base big time on this one what with blues-based ass shaking tracks like opener “City Boy Blues” and “Raise Your Hands To Rock.” Even revealing tracks like “Keep Your Eye On The Money” and “Save Our Souls” possess a sort of sexy bump and grind quality. Yeah, Sixx might have been hooked on smack but that was hardly the only kind of shake he and his Mötley mates were interested in. Heck, if the Crüe hadn’t deliver the perfect strip club dance track ala “Girls Girls Girls” a couple years later, these last two would have worked just as well.

It has been said that in the the eighties, the sure fire way to break the hair band bank, blow up MTV video views, and sell the maximum amount of cassingles could be found in a blended formula of covering a seventies rock anthem and/or releasing a power ballad as a records second single. Well with “Home Sweet Home” Mötley hit a sure-fire home run that to this day draws fans to pull our lighters, waving arms, and in many cases, tears of nostalgia. It stands as the Crüe‘s one defining tender moment that in some ways goes against that bad boy exterior especially when you consider that it’s built around drummer Tommy Lee‘s piano playing. Yeah, this guy known just as much for moving car and boat Pamela Anderson sexcapades and moments of lawful marital aggression as he is for pounding the skins is the guy behind the pretty piano on one of the band’s most emotional songs. Luckily this only happens for a few minutes. As legendary as “Home Sweet Home” has become, Mötley Crüe are still at their best when tearing up the stage with pumped up rock and roll anthems which they did to cover that other tried and true hair hit hook – the seventies cover tune.

In the eighties, rock bands were pretty sharp when it came to riding lesser know seventies rock anthems to increase record sale success. Quiet Riot did it twice with a pair of Slade songs (both big hits in the UK but barely known in the US). Krokus took a swing at the Guess Who‘s “American Woman” and Sweet‘s “Ballroom Blitz.” Great White had a huge hit with Ian Hunter‘s “Once Bitten Twice Shy” but few other revamped tunes in the eighties have gone on to have the worldwide notoriety as Mötley Crüe‘s cover of Brownsville Station‘s semi-hit “Smokin’ In The Boy’s Room.” Maybe it’s the fun video of the band wrecking havoc on a school and its principal complete with every teenage boys’ dream of taking over the school gym for an out of control afternoon of rock and roll mayhem and destruction or simply the over-the-top bubblegum catchiness of the tune but whatever the reason, it works. From the cheeky rap intro clear through to the kick into the song, Mötley stay true to this 1973 ode to school boredom while giving it a very Mötley kick in the ass. Even the harmonica solo is delivered with grit and the finished result is an anthem that is not only as hooky as anything else on the charts in 1985, but edgy at the same time.

In comparison to KISS‘ output in the seventies (seven studio albums, two live ones, a pair of compilations and four solo albums over six years), Mötley Crüe‘s five albums from 1981 to 1989 might seem light but compared to the years since, releasing a new studio record every other year especially while on tour as one of the hardest partying bands on the planet is a pretty incredible feat. Consider also that every single one charted in the US top 100 improving each time along the way until Dr. Feelgood hit number one at the end of the decade on it’s way to going platinum six times! And that was after a debut platinum release, and three 4x platinum albums including Theatre of Pain, which topped out on the charts at number six and set the band up perfectly for the similar sounding Girls Girls Girls a couple years later. Yeah, no matter where you rank Mötley‘s third release with the band’s other peak eighties studio work, it still out punches many of their contemporaries top records and they did so covered in the most make-up and at times in some of the highest heels, and in 1985, they were at the top of the hard rock world while immersed in a total, over-the-top rock and roll Theater of Pain.