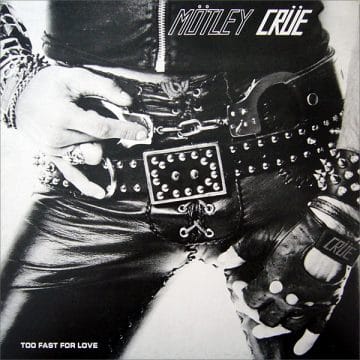 Review (Leathür Records version):
It was the summer of 1984, I came home from of a day of hanging at the park and quickly proclaimed to my parents with great exuburence that “Mötley Crüe is my favourite band!” Of course, my Dad looked at me with a confused look on his face. He quickly proclaimed “What the hell is a Mötley Crüe?” I was quick to respond, “It’s this really cool band, with this great album that we listened to all day, called Shout At The Devil.”

From that day forward my Mötley Crüe obsession began…

I would start back to school that September and couldn’t wait to tell my friends about this great new band I had discovered. Well to my dismay, they had discovered this “Mötley Crüe” as well. I remember one friend saying “So what Mötley albums do you own?” I responded with an embarrassed look on my face, “Well I don’t have any. I heard it on someone’s ghettoblaster.”

So that night, I told my parents what I needed for Christmas — not wanted — but I needed to have a Mötley Crüe tape… Oh, and by the way, Mom and Dad, I’ll need something to play it on. So that fateful Christmas morning in 1984, to my amazement was a Mötley Crüe tape from my Grandparents. It was not Shout At The Devil though. It was an album called Too Fast For Love. What else would be with this tape? Why a brand new tape player as well to play my new tape on. Heavenly!!!

I quickly popped the tape into the player. It was pure magic to my young ears. It was different though from what I had heard that summer. The music was raw and more poppy. My initial thought was that maybe they had a different vocalist on this album because the singer sounded much more adolescent then the vocalist on Shout At The Devil.

The album started off like a razor blade, as guitarist Mick Mars plays a fast, memorable guitar riff. The drums of a young Tommy Lee kicked in. Holy crap, what is this? I look at the back of my tape. “Live Wire”. Then these screechy, almost off key vocals of Vince Neil kick in. I was mesmerized by the sheer power of what I was hearing before me. Could this be real? I listened intently. I could feel the song was quickly drawing to a close. I thought “Has three minutes and sixteen seconds already passed?” The song was building to a crescendo. All of a sudden, it stopped! There was clapping with cowbell, then the main riff stopped — more clapping with cowbell. This went on a couple more times… It was over!!!

The next track started abruptly with a great guitar melody to follow. I checked the back of my tape — “Come On And Dance.” I listened, coming quickly to the chorus. “Public Enemy #1” Neil quickly proclaimed. Wait a second, that song was third on the tape listing. Something was going on here. Was the track listing incorrect? As I listened, I was quickly drawn into this song. It was so catchy. The song came to an end… I quickly rewinded, stopped, knotted it, rewinded a bit more. I’d gone too far. I just let it play.

As I listened to “Public Enemy #1” come to an end for the second time, I wondered what the next song would be. Another intense guitar riff blistered my ears. The band played on for about about thirty seconds, then the tempo changed and Neil‘s piercing voice came through the speaker. Well I knew already this wasn’t “Public Enemy #1.” I got to the chorus and a gang vocal shouted “Take Me To The Top.” It was so in my face. I’m not sure I was prepared for this. I was only 10 years old. This wasn’t my Dad’s country music.

I then decided, I’ve made it this far, no turning back now. The fourth song started off slowly with a chorused acoustic guitar. I again checked the back of the tape. “Merry-Go-Round.” The song built and sure enough, the listing was correct. I was taken by the beauty of the music. It had its aggressive points, but there was an inner beauty that showed throughout in the vocals. Neil ended the song with an “I’m comin home babe” and Lee faded out with a few light cymbal hits.

I thought to myself of how cool this was, then suddenly a big build up started the next song. A chugging guitar in the background added the depth. I looked at the listing once again. It stated, “Take Me To The Top.” I knew that was not the case because I had already heard that song. Waiting for the chorus, it arrived with Neil stating “Get A Piece of Your Action”. Ah yes, “Piece Of Your Action.” I got to the middle of the song and this heavy, slide guitar begun. The bass of Nikki Sixx could be heard underneath with Lee attacking his ride viciously. The song ended abruptly. I let the tape run to the end. I flipped it over.

Side two started with Lee pounding on very heavily reverberated drums. The guitar then followed with Mars riffing ferociously. The bass of Sixx lied in the pocket and drove the beat. I was astounded by the pop sensibility that this track possessed. Neil’s vocals were piercing and desperate at times, which added character to the song. The track listing on this one was “Piece Of Your Action.” But the chorus told me differently. “Starry Eyes” was the actual song.

The next track started with a quick bar dive into a a cool riff. The band stepped in and created a great groove. Suddenly, the tempo changed. I checked the tape — “Starry Eyes.” Nope. I waited for the chorus. Neil announced “Hey man, look at me I’m screaming.” Shortly after, I was told what song it was — “Stick To Your Guns.” I checked my tape. This song wasn’t even listed! I was dumbfounded. Oh well. I kept listening — another tempo change. Sixx played a cool little bass lick, while Lee‘s ride was predominently out front in the mix. Then the song quickly moved back into the chorus.

A thundering guitar riff started the next song. As it built, an effect was heard in the back. The lyrics caught my attention immediately. “Took my love into overdrive. Custom pink, tonight you’ll pay the price.” I was hearing Neil singing with a snarl. I got to the chorus, “Come On And Dance.” Finally, here was the track that was listed as the second song. The song ended with Neil proclaiming slowly “Come… On… And… Dance” as the band hit and stopped.

“Too Fast For Love” was next on my listing and was absolutely correct on the tape. It started off slowly with Neil stating “When you’re young and crazy, life goes on.” This carried on for about thirty seconds, then, yet again another great tempo change. Mars killed the guitar riff. This song was sleazy, dirty and cool. The band came to the chorus and they all proclaimed “Too Fast For Love”, while Neil overlapped them. A classic in the true sense of the word.

“On With The Show” was the final track and listed correctly. This started with Mars palm muting arpeggiated chords. Neil came in sounding young and desperate. The lyrics spok of Frankie who passed away prematurely. I was taken by this song immediately. The chorus built and had so much power. A great ending to a great album. I turned it over and started all over again!

I would listen to this album repeatedly for months, until the tape just stopped working, which was devastating at the time. It would be months ’til I would hear this album again. A friend of mine let me borrow his copy. I put it in my Walkman as I was collecting money on my paper route, but what I heard on that copy was not what was on my original copy. I took it back to him the next day in disgust. He then explained to me that there were actually two versions, the superior Leathür Records / independent release and the one released by Elektra Records that was remixed. I had the Leathür Records‘ version originally. But at the same time, it did indeed say Elektra Records on it.

Years later, I would come to find out that Elektra — and only in Canada — released copies of the original mix, with “Stick To Your Guns” on it, to eleviate the demand until the new mix was ready for release. It was just by default that my grandparents went into a store and purchased that Leathür Records mix for me. Of course, Mötley Crüe has reissued this album on vinyl, which I own. It is available on the first box set Music To Crash Your Car To also. I was fortunate enough to find a copy that says Elektra Records with the Leathür Records mix on it in a used album store. Interestingly, the track listing was correct on that copy.