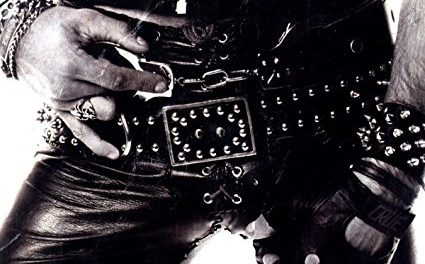 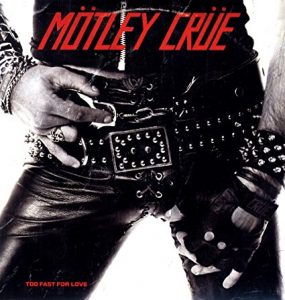 Review (Elektra version):
So it’s sometime in 1982 and I’m flipping through Music Express Magazine and in its pages, there’s an add for these four rocked up glam guys with a bunch of Canadian tour dates called Cruesing Through Canada. For all you Thunder Bay readers, yes, the Crüe were going to play here in our fair hometown at the Landmark Inn Bar. Seriously, I remember seeing an add also about Kim Mitchell playing the Landmark as well so I guess it was a rock bar at one time? Anyways, to make a long story short, Mötley Crüe got kicked out of Canada — in the province of Alberta I think — so they didn’t even make it here. In any case, since I was 15, I would have been shit out of luck at getting into that show.

“Live Wire” — Mick Mars opens the album with that riff which we all know and bam, here comes Tommy Lee. I tell you! Next to the John Corabi Mötley record (from ’94) and parts of Dr. Feelgood (’89), this is Lee‘s best drumming. The mix on the debut is mint man! Shit, Tommy gets my vote for MVP on this album! He’s the captain of the ship here folks. Yeah, stop your giggling. He’s on fire and he plows this record from the get go! Vince Neil sounds good but a little light weight in the vocals but that’s cuz he’s still young. Mars can play guitar and well he should, I think he was like 55 years old (ha!) when this album was recorded in 1981. Nikki Sixx chips in and keeps the bass simple… What an opener and man, listen to the break at the end when Tommy nails the cowbell. Recorded gold with the sonics!

“Come On And Dance” — Guitar, bass and drums rocket this song into space and it’s evident that Nikki Sixx has the knack (on this album) for writing the hook! The verses are straight ahead catchy sing alongs. The chorus — hell man, more of Tommy Lee‘s cowbell… Bam, bam, bam. C’mon On Dance… Mick nails down the hatch a quick little solo and it’s back to the sing along catchy verse with more cowbell!

“Public Enemy #1” — Sixx goes for the throat on this track and it has all the elements of a great early ’80s nugget. The song features a cool riff, some heys thrown in, Mars doing diddling things on his guitar, Sixx playing some cool grooving bass, more kick ass cowbell from Tommy Lee with Vince rolling it all up vocally into one big fatty of a memorable rock track!

“Merry-Go-Round” — A rock ballad before the term power ballad reared its ugly head on the Theatre Of Pain album (“Home Sweet Home”) but give Sixx credit man, he’s young figuring out shit musically. I mean, if he doesn’t have the tunes, who the hell is gonna supply the music? Vince? Ha, ha, ha! This song is alright. That’s it. There’s a mellow, chill acoustic verse and then Mars Bars lays it on thick with his sludge sounding riff a rolla! Geez, the more I talk about “Merry-Go-Round”, the more I’m kind of digging it now. Is that a buried under the mix cowbell I hear at the start of the second verse?

“Take Me To The Top” — Tommy Lee starts off this song and man, it’s another straight ahead rock track! Nikki and his bass aid the song and this is a flat-out rocker. Mars lays down the solo and Vince lays down a great vocal. Shit, did I just say that?

“Piece Of Your Action” — Hmmm, what I remember about this tune from all those years ago is Mars lays down a solo by himself while Tommy keeping the count going! I mean I’m 15 and here’s a dude throwing down power chord solos on a studio album of all things. I mean that’s ballsy! The song itself is good. The verses are cool. The chorus is catchy. Another great track!

“Starry Eyes” — Nikki knows Tommy‘s the man so Mr. Lee starts “Starry Eyes” (“Oh, oh… starry eyes”). This is glam cranked up and no holds barred rock n’ roll. This has a real good chorus. How about a real damn good chorus! Geez, and there’s Tommy nailing his cowbell yet again!

“Too Fast For Love” — This is the title track and Sixx nails another gem. Cool verses with Tommy leading the charge with everyone following him (Nikki with his bass, Mick with his guitar, and Vince nailing down the lead vocal). Cool chops all around in this song! I dig the drumming man!

In conclusion, for the Crüe, I tell you, next to the Corabi album of 1994, those two in my mind are the best recorded studio works. What a great mix and production on the debut. This is Tommy Lee before he discovered 360 drums cages and roller coaster drum solos. Tommy, like I said earlier, drives the album into unchartered territories for a debut. As well, for a debut album, how many albums can you name out there that has that much cowbell action?