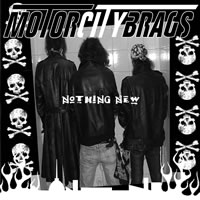 Review:
One might expect a band named the Motor City Brags to be from Detroit. However this trio that proclaims their music to be “full violence rock n roll” actually hail from Italy. Musically the group could be considered a punk band upon first listen – but with repeated listens there is more going on. Sleazy vocals, seventies guitar licks, muddy production and some weird lyrics are the pros and cons of Nothing New.

The first couple tunes clock in at under two minutes, with the guitar line in “One Eyed Jack” being the only memorable moment. Things pick up with “Torino Boulevard” and its three chord AC/DC approach. It has an incredible beat and a simple yet effective chorus. “Motorcity Jail Rejects” has the venom of early Guns N’Roses, but the vocals are set too low in the mix. However the song is saved by the final two minutes of unyielding guitar fury – I’ve always liked when songs end this way.

The Motor City Brags definitely have their moments. Even though the production leaves a lot to be desired, it actually fits the unpolished music being delivered. This “motor” may not be firing on all cylinders, but with some work in the shop the Motor City Brags could be a force to be reckoned with. You can listen to samples of the group at www.motorcitybrags.com.