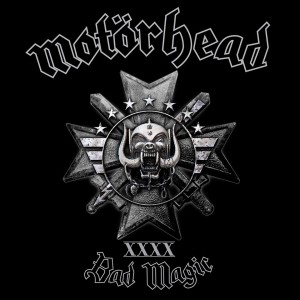 Review by Ruben Mosqueda:
Motörhead are one of the bands that gets accused of issuing the same album over and over again. Others that come to mind are The Ramones and AC/DC — so Motörhead are in good company I think. Frontman Lemmy Kilmister has been plagued with health issues over the course of the years since the release of their last effort 2013’s Aftershock. Kilmister’s health essentially put the brakes on any proper tour of the United States behind the relatively good Aftershock. Kilmister took a brief hiatus from touring and by all accounts, he’s been on the mend though it’s been slower than Kilmister would have liked.

The upside of this is that Motörhead had a bit more time to knock out some new material and get into the studio with their (now) long time producer Cameron Webb. Their 22nd effort is Bad Magic and it is Motörhead at their best. It’s a bombastic audio assault complete with the English wit of rock ‘n’ roll troubadour Kilmister.

It’s hard to imagine a rock and metal scene without Lemmy Kilmister; he is to hard rock and metal music what Johnny Cash and Waylon Jennings were to country music. Yet, the two aforementioned passed on and the genre moved forward — but not for the better. As Motörhead continue to add to their back catalog 40 years in; Bad Magic offers up their most consistent album since the now classic Inferno.

The standout tracks on Bad Magic are; the new concert staple “Thunder & Lightning,” the gritty “Electricity,” the terrifying “Choking On Your Screams,” and the explosive cover of The Rolling Stones’ “Sympathy for the Devil.” Lemmy had this to say to USA Today about the aforementioned track; “I thought we beat them. I thought we beat it to death. I mean, I like the Stones’ version, but I like ours better.” I can’t say that I can disagree with him.

Review by Olivier:
There are only a few things that are certain in life: death, taxes and Motörhead will deliver a balls to the wall, no holds barred, rocking studio album. It is therefore no surprise that Motörhead have done it again with their 22nd studio album, Bad Magic, which delivers exactly what Lemmy Kilmister and his band are known for. Funny enough, my first introduction to Motörhead was looking at their videos for “Ace Of Spades” and “The Chase Is Better Than The Catch.” Thirty years later, Lemmy is still delivering the same kind of ferocious hard driving punk meets metal tunes.

As well documented in recent years with Lemmy‘s current health issues, the man only has one gear and that is full out all the time. That is exactly what Bad Magic does pretty much from start to finish. The first track “Victory Or Die” pretty jumps out right at you and the madness and fury is on all the way through to the eight track “Teach Them How To Bleed.” Along the way, you will be treated to some fine leads from Phil Campbell who really delivers on Bad Magic. Highlights along the way during those first eight tracks include the opener “Victory Or Die” which sets the pace early on, “Electricity” which is likely the best track, “Thunder & Lightning” with its all out assault and “Fire Storm Hotel” with its story telling feel. “Till The End” is a bit of a surprise as Lemmy is caught singing — yes, singing — on a song that is part ballad, part sing along chorus — well, as much as you are going to get a sing along chorus on a Motörhead record. Lemmy will never be known for his power ballads and he simply does not have the voice to carry such songs so not surprisingly, the one bad track on Bad Magic is “Till The End.” Luckily, Lemmy and the boys are back at what they do best on the tenth track “Tell Me Who To Kill” which is just a heavy rocker from beginning to end. While I enjoy most of the tracks on Bad Magic, the three that I am as fond of are the ones where Lemmy adopts a different vocal delivery than usual — the already mentioned “Till The End” ballad, “Evil Eye” with its deep voice talking parts and “Choking On Your Screams” which has Lemmy talking his way through most of the song.

Bad Magic closes off with a rendition of The Rolling Stones‘ “Sympathy For The Devil” which is to my surprise really good! Lemmy‘s voice this time is the deciding factor giving the song a darker edge throughout. While it is easy to say that Motörhead have regurgitated another similar sounding studio album, the fact is that these similar sounding studio records including Bad Magic are dependable, mostly solid and pretty much exactly what I want to hear from Motörhead.

Reviewed by Olivier and Ruben Mosqueda for Sleaze Roxx, September 2015

The official lyric video to ‘Electricity’, a song from the forthcoming album ‘Bad Magic’ (to be released on August 28th 2015).Grab your personal copy of ‘Bad…