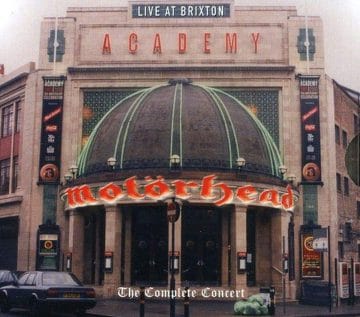 Review:
Motörhead live…. two words that go very well together. If you’ve never seen Motörhead in concert, then you really cannot appreciate everything that was great about them. It’s so sad to have to talk about them in the past tense. I think they’re the band I’ve seen more than any other, beginning with their infamous second-to-last gig on the Iron Fist Tour in Toronto on May 12 1982, with Krokus and Ottawa’s Fist. I can honestly say that I have never heard anything that painfully loud in my many years of concert-going. At the end of the gig, I was stunned and dumbfounded. My final live encounter was in Kingston on Megadeth’s Gigantour on February 5 2012. In between…. not a single dud gig, guaranteed. Motörhead have documented their years of touring with many live albums. None surpass the essential 1981 release No Sleep ‘Til Hammersmith. If you don’t have it, beg, borrow, get it.

In 2000, Motörhead were touring in support of their 15th studio album We Are Motörhead. Founder Lemmy, guitarist Phil Campbell and drummer Mikkey Dee were already a seasoned recording and touring trio. London’s Brixton Academy on October 22nd was the site of another live Motörhead souvenir to commemorate the band’s 25th year anniversary, this time to be released in audio and video (as 25 and Alive Boneshaker) formats. The final product comprised 23 songs spanning the band’s career, but focussing on the band’s post-1984 (i.e. post-‘Fast’ Eddie) albums. Let’s break it down and to truly appreciate the album, crank it to just before the point of audio distortion.

The warts ‘n all (Lemmy R.I.P.) concert begins in fine form with the one-two punch of “We Are Motörhead” and my personal fave, “No Class.” Awesome! The band then pull from their back catalogue — classics like “Dead Men Tell No Tales” and “Metropolis” shoulder to shoulder with later songs like “Going to Brazil” and “Overnight Sensation.” The audio quality is very good. This ‘final’ band lineup was excellent with Phil Campbell and Mikkey Dee (excellent drum solo during “Sacrifice”) more than rising to the task of backing up Lemmy. The band saved the best for the last, going out with eternal headbangers “Damage Case,” “Iron Fist” (my second fave), “Killed By Death,” “Bomber” (with the legendary bomber light rig hovering over the band, my third fave), “Ace Of Spades” and “Overkill”.

For this anniversary concert, Motörhead trot out a bunch of guests, some fantastic, some a bit obscure. From the latter category, Whitfield Crane from Ugly Kid Joe and Martin Kent from Skunk Anansie; both bands that had a profile at the time, but likely unknown to most these days. Cool, though, to see Doro Pesch from Warlock and, Lemmy and Phil Campbell’s sons, both of whom are capable guitarists. The best, though, is Queen’s Brian May grinning all the way through “Overkill”, and former Motörhead six stringer ‘Fast’ Eddie Clarke with his trusty Fender Strat on a couple of tunes.

Best line of the show? Of course, it’s Lemmy — “I’m just doing the best I can up here with the limited intellect that the Lord gave me.” Is it an essential purchase? Well…. It’s always nice to complete your Motörhead collection but get No Sleep ‘Til Hammersmith first!

Motörhead‘s “We Are Motörhead” video: