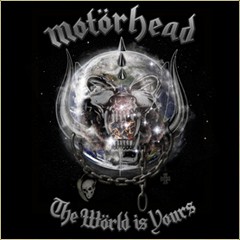 MOTORHEAD
THE WORLD IS YOURS
Released February 8, 2011 (Motorhead Music/EMI)

Review:
It’s been a little over two years since Lemmy and Co. released their last studio album Motorizer. That record received a pretty good reception following the flat and appropriately titled CD Kiss Of Death. It’s possible that Motorhead raised the bar so high with 2004’s Inferno that its successor was unlikely to meet the high expectations.

Having said that, the track record of this incarnation of Motorhead, together since 1996, has been extremely consistent. Motorhead keep rolling out album after album, and going on tour after tour, with no end in sight.

The World Is Yours, Motorhead‘s 20th studio effort, finds the band once again working with longtime collaborator Cameron Webb who has been producing their albums since 2004. The end result is another incredibly potent and aggressive clash of rock meets metal.

There are a number of notable tracks on The World Is Yours. On “Brotherhood Of Man” we find Lemmy blatantly plagiarizing himself and writing an apocalyptic ‘Orgasmatron II’. A nod to the golden age, “Rock ‘N’ Roll Music” features an amazing riff that sounds like Chuck Berry on steroids. “Outlaw” finds the band getting shot out of a cannon and then proceeds to chug along in true Motorhead fashion. Lastly there is “Bye Bye Bitch Bye Bye”, which is another clever Kilmister creation about… you guessed it, a woman in Lemmy‘s infamous past.

Like any Motorhead album… if you’re a fan you’ll love The World Is Yours and if you’re a hater you’ll pan it.