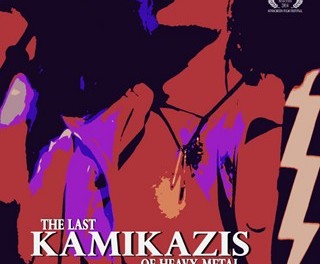 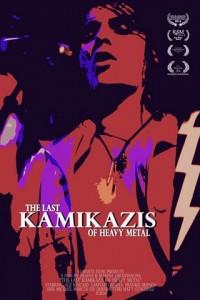 Review:
There are more and more world class documentaries being filmed these days pertaining to heavy metal bands — from 2004’s Metallica: Some Kind Of Monster to 2008’s Anvil: The Story Of Anvil to 2014’s Quiet Riot: Well Now You’re Here, There’s No Way Back — but none that really feature an up and coming group. This has changed with the release of The Last Kamikazis Of Heavy Metal, which has been billed as the story of Chicago based metal band Hessler. I look at the documentary as a snapshot of what was going on with Hessler during the time period it was filmed, since the band have gone through some significant line-up changes and released their stellar Ghost Dance EP in the year and a half after filming commenced.

The Last Kamikazis Of Heavy Metal has filmmakers, and Bulgarian sisters, Marina and Bilana Grozdanova following (or really being with) Hessler while they are touring through portions of 2012 and 2013. The film essentially captures and documents the loving, yet sometimes tumultuous, relationship between leader, founder and guitarist Igz Kincaid and the remaining band members. The documentary is well done in that you can understand where each musician is coming from and is cleverly crafted in that the personalities (or at least what they want the audience to see) of the five key Hessler members are well developed on screen and the viewer ends up feeling like he “knows” the band without having actually met them.

With five distinct personalities, a viewer can likely relate to at least one of the band members personality wise. You have the ultra driven, very committed and sometimes egocentric Kincaid pushing the Hessler machine as hard as he can no matter what and according to his own vision. You have drummer Marcus Lee, who is really the only band member on screen willing to challenge or criticize Kincaid‘s almost dictator like ruling of the Hessler juggernaut. You have lead singer Lariyah Daniels, the sometimes naive blond bombshell model, getting frustrated with the journey for the band to get to the next level. You have long-time bassist Eric Michael quietly contemplating why certain Kincaid-made rules do not appear to be followed. Finally, you have happy go lucky guitarist Frankie Snakes Sripada, who simply appears to be going with the flow and not letting anything really bother him.

Quite simply, The Last Kamikazis Of Heavy Metal is very well done and there is a reason why it has screened at festivals all over the world, even winning some film related awards. If anything, the documentary provides some insight into how difficult it must be to have five bandmates all on the same page for such a long period of time — and it also leaves the group open to scrutiny on all of their various line-up changes. The one inevitable downside is that the actual filming dates back to about a year and a half ago, so the music featured in The Last Kamikazis Of Heavy Metal does not showcase newer material that Hessler released in 2014. That is a bit of shame, because I find that Hessler‘s newer songs are stronger than the ones that are featured in the documentary. If there is one thing that I take away from The Last Kamikazis Of Heavy Metal, it is that I now have no doubt that the Hessler machine will be forging ahead no matter what adversity it faces — as long as Kincaid is interested in continuing.

Any lover of heavy metal will enjoy viewing The Last Kamikazis Of Heavy Metal. Whether you like Hessler‘s music or not, the film gives you a behind the scenes look at the struggles that many newer metal bands likely go through while touring in this day and age — and I’m sure anyone who has ever been in a band can relate to some of the issues raised in the film.

Back in 2008, the documentary Anvil: The Story of Anvil rejuvenated the career of the Canadian metal band and got them back onto music festivals and and landed them better touring bills. The Last Kamikazis Of Heavy Metal could well be what Hessler need to get to the next level, as many in the industry should take notice of them given that the documentary is that good and deserves continued international recognition and success.

Buy The Movie:
Purchase at Vimeo.com