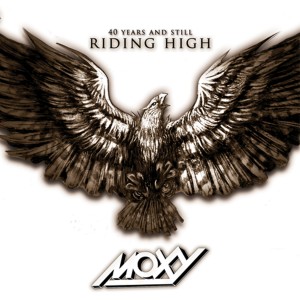 Review:
Some people prefer the classic ’70s sound — the nuanced production values and the needle on the record feeling. Others would rather have today’s modern wall of sound and in your face instrumentation. That’s your choice. I have been listening to Moxy lately, comparing the 1970s originals to the re-imagining of those originals in 2015. It’s an interesting experience.

Moxy are a band formed in Toronto Ontario in 1974 by Doug Sherman, and originally included classic Canadian rockers Greg Godovitz (Goddo) and Gill Moore (Triumph), as well as guitarist Earl Johnson. The band later became a 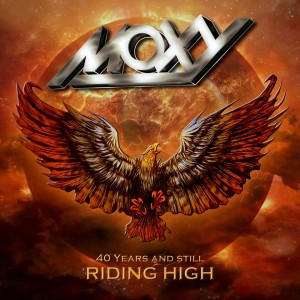 revolving door of musicians, such as Mike Reno (Loverboy) and Tommy Bolin, who later replaced Ritchie Blackmore in Deep Purple. Between 1974 and 1983, Moxy released five albums and toured North America with the likes of AC/DC, Aerosmith, Triumph, Boston, Styx and Black Sabbath.

That’s the background but now to the 2015 album 40 Years And Still Riding High. The only original member left is Earl Johnson, who brings a new set of talented musicians to these 14 tracks. Slik Toxik and Famous Underground vocalist and Canadian Juno Award winner (in 1993) Nick Walsh has the pipes to really belt out these songs. Johnson and Rob Robbins have developed a crunchy and distorted guitar sound, and Rod Albon on bass with drummer Alexis Von Kraven fit quite well in the pocket. In fact, there’s really nothing much to dislike about this record. Sure it lacks the details and nuances of the original songs, which were much more like early Rush, Triumph, or even hints of Max Webster.  But these updated versions have a style and swagger all their own.

Sleaze Roxx editor Olivier reviewed Moxy’s Live In Toronto late last year and said “It only took me forty years to discover Moxy but I am glad that I did. I also look forward to hopefully catching them play live given that Walsh is based in the Toronto area. It is funny how some of the best bands are right under your nose and you don’t even know about it! Moxy’s songs are just too good not to be known and enjoyed.”

I’m glad that I discovered this updated set of Moxy tracks from years gone by. It’s driving rock for a modern age. But, as good as this hard rock serving is, I can’t get over the feeling that 40 Years And Still Riding High is really just a glorified tribute act. Compare for yourself by listening to the YouTube tracks below with the original versus the updated “Sail On, Sail Away.”

Sail on Sail Away

Provided to YouTube by TuneCoreSail on Sail Away · Moxy40 Years and Still Riding High℗ 2016 Babylon Music GroupReleased on: 2016-03-08Auto-generated by YouTube.