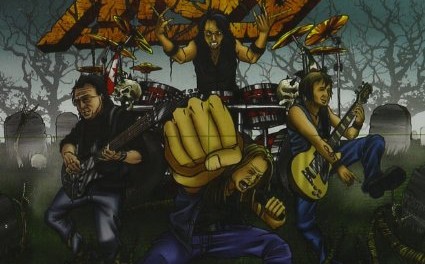 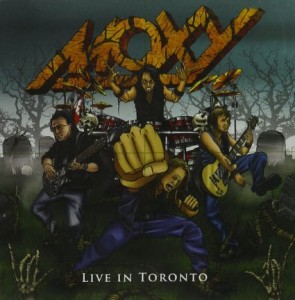 Review:
I take a lot of solace in knowing that Moxy‘s new lead singer was not really familiar with the group prior to being asked to sing in the band. After all, if Nick Walsh of Slik Toxik fame does not really know who Moxy is, how can I be expected to know about this ’70s veteran classic rock band? And unlike Walsh, I did not have big brothers who could possibly have those Moxy albums in their record collection given that I was the big brother who was influencing the younger one with my musical taste. Whether Walsh and I knew about Moxy or not growing up, it is fantastic that Walsh has joined Moxy since he seemingly has brought new life to the classic rock band who has now released two albums with him at the helm.

Moxy have a long and storied history and at this point, there is only one original band member left — guitarist Earl Johnson. Listening to Moxy‘s Live In Toronto, which was recorded back on September 7, 2013 in — you guessed it — Toronto, Canada, makes you appreciate how good that Johnson is as a guitarist, especially when he lets it rip during a guitar solo such as a song like “Out Of The Darkness.” Live In Toronto is especially intriguing since this was apparently Walsh‘s first ever gig with Moxy and he had just two weeks to learn all the songs! It certainly does not sound like Walsh just learned the songs because he puts on an impressive vocal performance and has to be considered one of the great singers of his era.

Anyone who enjoys classic hard rock from the ’70s is likely going to enjoy Moxy’s Live In Toronto. The songs on this live album have held up very well over time. There is definitely this classic ’70s feel to the songs but coupled with Walsh‘s younger sounding voice, the songs sound really fresh. It is pretty incredible to see that six out of the eleven tracks emanate from Moxy‘s self-titled debut album released back in 1975. I really like every song on Moxy‘s Live In Toronto with the first four really standing out along with “Moon Rider” and the set closer “Ridin’ High.” The drum solo could have been left off Live In Toronto as it breaks the momentum of the album somewhat. I am also not crazy of the ballad “Fantasy” and based on that song, I think that Moxy are better at the classic hard and/or bluesy rockers than the ballad type songs. While I am all for bonus tracks, it would have been better to end Live In Toronto with the scorching rendition of “Ridin’ High” rather than offer a studio remixed version of a song that is already on the live album.

It only took me forty years to discover Moxy but I am glad that I did. I also look forward to hopefully catching them play live given that Walsh is based in the Toronto area. It is funny how some of the best bands are right under your nose and you don’t even know about it! Moxy‘s songs are just too good not to be known and enjoyed. You can purchase Live In Toronto at all the usual channels but also via Perris Records.

MOXY “Ridin’ High” from the LIVE IN TORONTO 2015 album