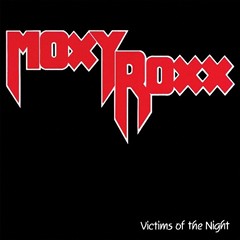 Review:
I’m always amazed at the outrageous prices collectors will pay for hard to find releases. Take Moxy Roxx for example, whose original 1986 indie EP can fetch upwards of $100 — it is pure insanity, but everyone has their vices and for some it is music.

These rare independent releases raise the question of, ‘are they worth the exorbitant prices?’ The answer is almost unanimously, no! It’s not to say the music is bad, but if I’m going to blow a paycheck on an old CD, LP or cassette the songs better be something well above ordinary. Paying a lot of money for these rare gems is more a case of bragging rights for the purchaser than love for the music contained within. It is that theory that makes Moxy Roxx‘s Victims Of Success even more laughable, because the best songs on this reissue are the bonus tracks that weren’t included on the original album.

What has helped sell Moxy Roxx in the past is the group’s history, namely guitarist Brooke St. James who moved on to Tyketto and drummer Jackie Ramos who resurfaced in Hericane Alice, Bangalore Choir and Bad Moon Rising and even Axe drummer Teddy Mueller who was a part of the group in their formative years. It is those connections that make Moxy Roxx more interesting than so many others that teased their hair and raided their mother’s make-up drawer… it is also the reason why the music itself is better than the average run of the mill stuff.

The five tracks on Moxy Roxx‘s original release are your typical melodic rock fare, with the addition of ample amounts of keyboards — something that gives the band a dated sound now. Of those first five songs Moxy Roxx is at their best during “Victims Of The Night” and “Broken Man”, both of which sound like King Kobra leftovers. From there the band gets a bit heavier and more interesting. “Sheila” for instance is a moody little number while “Everybody Loves Alice” finds the group at their heaviest and best. On “Reachin’ For The Stars” and “Rosy” the band starts to take a Rhett Forrester era Riot turn and do it extremely well. Some of the later tracks were recorded live, but the sparse liner notes don’t give any indication of where or when any of these recordings took place — which is my biggest complaint with this CD.

Victims Of The Night has two completely different feels to it, the keyboard heavy glam of the first few tracks and then the heavier hard rock that concludes the album. Even though the production values on these old tracks leave something to be desired this is a fairly enjoyable disc, even if it’s primary drawing power is as a footnote to the successful member’s biographies.