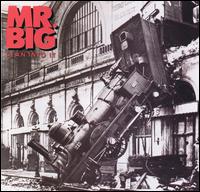 Review:
Lean Into It is Mr. Big‘s second (and best selling) album, and an excellent example of pop metal. The debut single, “Green-Tinted Sixties Mind”, as well as other rockers such as “Never Say Never” and “A Little To Loose” were great songs but didn’t sell the album. It wasn’t until the release of the huge ballads “To Be With You” (which reached #1 and went gold) and “Just Take My Heart” (#16) that the album exploded with over a million sales.

Despite the success of the ballads, there was still enough rocking with Paul Gilbert and Billy Sheehan (with his bass guitar and electric drill!) to keep the original fans content. Lean Into It is chock full of catchy songs and huge melodies, and receives two thumbs up!