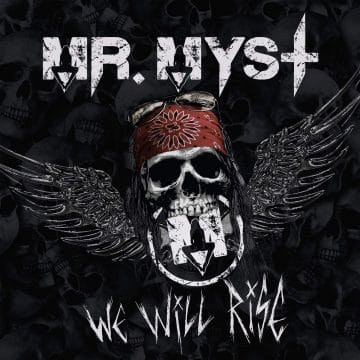 Review:
Mr. Myst are a sleaze rock band formed in 2013 and based in Ostend, Belgium, founded by Atticus Myst, guitarist for the metal band Ostrogoth. We Will Rise is the first full-length album from the band, following a 2017 self-titled EP.

The album opens with the bane of my existence, a two minute instrumental full of repetitious piano and monotonous power chord.  It really has nothing to do with the pounding “Forever And A Day” that got my attention with its aggressive instrumentation and offsetting vocals. Title track “We Will Rise” is a tad derivative… I’ve heard it before but it’s still a worthy entry to this album. “Set Me Free” has an interesting digital sounding drum intro, but unfortunately the drums are way over the top and the song in general is pretty elementary.

“Freak Like Me” recalls a bit of an Airbourne style pensive intro but again, there isn’t much to really bite on. I will say “Backstab” does have a decent guitar break, but overall, the punk element isn’t exciting. The final track on this eight song outing is “2FU4U”, or “Too Fucked Up For You.”  Apparently the groupie is hot, the band is wild, and shenanigans ensue.  The song itself is not awful but it is dragged down by lyrics too poorly conceived even for Steel Panther — “She came to me asking to light up her smoke…. Said no way babe cuz soon you’ll be givin’ head.” Classic. Oh, I forgot to mention the Mr. Myst cover of Roxette’s old ’80s tune “The Look.” I actually really like it. The original had subtle guitar riffs that Mr. Myst highlight and absolutely kill. A cover should be unique to the band, and this one is very well done.

Mr. Myst have some decent potential. I didn’t like this album for a few reasons. Virtually every song includes gang vocals at some point. Other songs sound like they were performed by garage band kids, while others couldn’t reach the lofty potential they were shooting for. All in all, I won’t rise to this album in the future.

Mr. Myst – Set Me Free, Official Music VideoFrom the album ‘We Will Rise’ you can get on Amazon, Itunes, Google… http://www.mrmyst.comFollow us on Facebook…