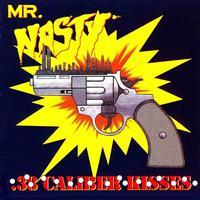 Review:
Many people feel that Faster Pussycat peaked with their self-titled debut – if you are one of those people, then Mr. Nasty‘s .38 Caliber Kisses will sound like the logical follow-up to that album. It is an album that takes the best from Faster Pussycat‘s debut and Wake Me When Its Over and combines them into one cohesive and killer release. Vocalist Dee Dee Sweet has the same gritty nasal delivery as Taime Downe, and the rest of the band can more than compete with the original Faster Pussycat core.

Don’t let the cliched song titles fool you, this is great sleazy rock. For instance “Kandyluv” sets down a mean beat and uses screeching vocals to ram its message home. “EZ Action” has a hypnotic rhythm pulsating throughout as it teeters between sleaze and pop-rock. I also like the good-time approach to “Love Rockit”, a party anthem with an addictive chorus. Even “Shakin’ The Walls” has a similar feel to Faster Pussycat‘s “Where There’s A Whip”.

In fact the similarities between the two bands is endless, but whereas Pussycat decided to experiment with Whipped! (and thus deflate their career), Mr. Nasty filled the musical void. Albums like this are the reason music was so much fun in the late 80s and early 90s. In fact the group is working on new material and one can only hope it is this good. Check out the band at www.thehardline.net and relive some great music you may have missed out on the first time around.