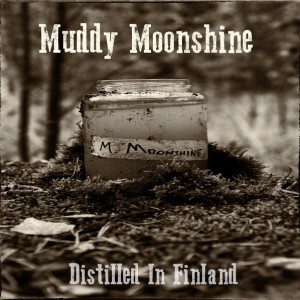 Review:
A lot of times, a band will throw in a blues filled number on their album. I have always viewed such tracks as filler ones where the group is either experimenting or simply trying to fill up their record because they have run out of good songs for their album. One example is Bon Jovi on New Jersey with the song “Love For Sale” — definitely a filler track but one that you can warm up to over many years.

I had never encountered a band that released only bluesy filler type tracks on an album but Muddy Moonshine unfortunately fit that bill with their debut EP Distilled in Finland. I don’t mind an odd bluesy tune here and there but a whole album full of them isn’t my cup of tea. Throw in some lead vocals that are just a tad better than the singing from ex-W.A.S.P. guitarist Chris Holmes in his new band Mean Man and you have a disappointing debut EP. Muddy Moonshine describe their sound as “Finnish blues.” The opening track “Left My Girl” feels heavy on the slide guitar which gives it an annoying overall sound. The best track is the second one called “Back In Jail” which is probably the “fastest” — and that is relative to the speed of the other tracks — song on the album and which luckily takes the spotlight off lead singer Tero Danger‘s singing — if you can call it that. The third track “Bottle Of Love” has a cool groove to it and just like its predecessor is faster paced which works in Danger‘s favour. Distilled In Finland ends with “Succubus” which again feels quite heavy on the slide guitar.

Apparently, Muddy Moonshine are working on a full length album and have advised that their sound in some cases is even a bit heavier. Perhaps and hopefully “heavier” means faster paced because the best tracks on Distilled In Finland are the two faster paced ones of “Back In Jail” and “Bottle Of Love.” In conclusion, there is simply too much better music out there for me to ever revisit Distilled In Finland again.

Muddy Moonshine. Track from Distilled in Finland- EP. Back in Jail. Released Jan 2015.