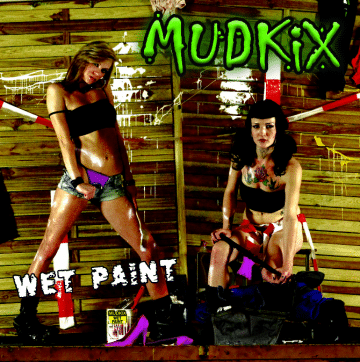 Review:
I have had Mudkix‘s Wet Paint CD for about eight months now and every time I was thinking of writing a review for it, I just wasn’t sure what to say. Part of the problem is that I listen to a lot of music while working and although I always thought that Mudkix‘s album was alright, it also failed to make that much of an impression on me. Part of the reason why I have found Wet Paint to be so comfortable to listen to is because Mudkix borrow heavily from the late ’80s / early ’90s when it comes to their sound. Accordingly, whenever I have listened to the record, I am always hit with familiar sounds, melodies, etc.

For the purpose of this review, I decided to really listen to Mudkix‘s Wet Paint. No more focusing on work while listening to the album. Wet Paint was thrown into the CD player of my car where it would get my undivided attention — while I drove. After one listen of the album while driving, I knew exactly what to say. Yes, Mudkix‘s music sounds familiar but there is nothing that really stands out apart from the title track “Wet Paint.” In fact, I was annoyed at the overall make-up of the album. If I had to describe the eleven track album with one word per song, it would go like this: rocker, rocker, ballad, ballad, rocker, acoustic, funky, ballad, rocker, acoustic and ballad. For a guy that’s not into ballads, having four of them on one record (comprising more than 33% of the album), that’s just plain overkill. Throw in the two acoustic tracks that are closer to ballads than rockers, and more than half of the album is comprised of ballads. No wonder Mudkix‘s Wet Paint was failing to make an impression on me when I had been listening to it for the last eight months or so.

Not only are there six acoustic / ballad type songs but none of them really have that superstar quality to them. Some of those tracks have some really good parts like the killer guitar solo on the rather wordy named faster paced ballad “You Turn My Whole World Upside Down (Can’t Live Without You)” and the melody filled verses on “Tears & Lies.” Those also happen to be the two best songs out of the six acoustic / ballad type tracks. Of note, you get two versions of the ballad “Wipe Your Tears Away” with a radio edit version at the end of the album. I am not sure why this was the track chosen to get that treatment as I find it to be one of the weakest tracks on the album — kind of a cheap attempt at a Poison type ballad.

Before you start thinking that I’m hating Wet Paint, the reality is that there are some really solid tracks on it as well. Clearly, Mudkix is better at the rocker type faster paced songs than the slower ones, and had there been more of the former, this review would likely be a more positive one. Let’s start off with the best song. “Wet Paint” has a catchy guitar riff to latch onto at the beginning, the song is upbeat and singer Sascha Becker‘s vocal delivery reminds me a lot of the singing from Canadian sleaze rockers Reverse Grip‘s (who have likely and unfortunately unofficially disbanded as I have not heard from them since February 2016) lead vocalist Dru Broda. The medium paced rocker “Push It (To The Limit)” with its easy sing along chorus could have easily been found on many ’80s hair metal albums and includes a cameo female voice for good measure. “She Drives (Back In The Morning)” is a straightforward rocker with lots of background vocals. “Bad Angel” is a funky number showing that Mudkix can easily and successfully branch away from their ballad tendencies. Mudkix need more songs like these to change things up. “Time To Leave” is another solid rocker with a rather unoriginal siren sound at the end reminiscent of KISS‘ “Firehouse.” Despite the at times cliché segments of the song, I would have liked to have more songs in that vein from Mudkix.

Overall, Mudkix deliver an album that is easy to listen to but could use a bit more variety and originality, and definitely less ballads and acoustic numbers. There’s nothing here that’s going to set the world on fire but it can likely fairly easily find a place in your hair metal album collection.