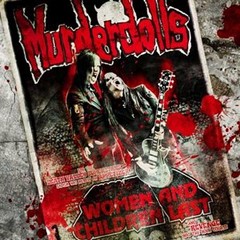 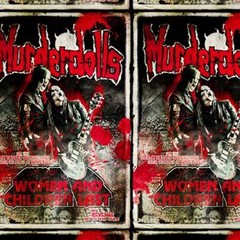 Review:
After an eight-year break, Wednesday 13 and Joey Jordison are back with the second Murderdolls record — Women And Children Last.

After a mediocre intro, “The World According to Revenge”, Women And Children Last gets off to a heavy, rocking start with “Chapel Of Blood.” The song is heavy as shit with really good guitars courtesy of Roman Surman and the typically speedy drumming from Jordison. The theme of the song, and pretty much the whole record, is of death and depression — so if you’re looking for an excellent Christmas gift this year, this steaming entree of metal will probably be your best bet.

Arguably the best track on the CD is “Bored ‘Til Death” with its refrain of ‘run motherfucker, run and hide.’ The screaming guitars and Wednesday 13‘s excellent vocals make it one of the best metal tracks of the year. Elsewhere on the album, the semi-melodic “Nowhere” shows the band trying out some new things, but in the case of Murderdolls its best if they stick with what they know best — full-on metal.

The chugging riffs of tracks like “Summertime Suicide” don’t make the songs any better, even though Wednesday 13‘s vocals are at their cleanest here, which is quite refreshing. The album’s low point is the chronically depressing “My Dark Place Alone,” which is one of those songs where it makes you wonder how long guys like this can continually write depressing songs over again and again. The one thing you can admire about Women And Children Last is the proficiently clean production throughout, particularly on tracks like “Homicide Drive” and “Whatever You Got, I’m Against It.”

All in all, the music on the record is phenomenal all the way through — but the horror themed lyrics are the same in just about every track and when the lyrical content differs, that’s when the record gets interesting. In essence this is basically just a fun, dark metal record that’s good for blowing off steam on a bad day.

Reviewed by Pete Crigler — author of Keeping It Tight In The Old Dominion — for Sleaze Roxx, December 2010