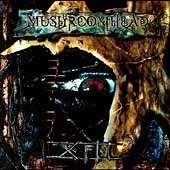 Review:
Nu-metal; I find it all so predictable. Sing a verse, scream a chorus, over lap with chugging down-tuned guitars and repeat. While most nu-metal bands employ this strategy until you contemplate suicide, at least Mushroomhead once in awhile show some actual musical ability. In fact if you threw Pantera and The Cult into a blender and hit ‘chop’ you might end up with Mushroomhead.

“Nowhere To Go” and “One More Day” resist the urge to fall into the screaming pattern and the results are mid-tempo songs that would have felt at home on The Cult‘s 1994 self titled album. “Almost Gone” shows that the band does have musical talent, with a cool guitar rhythm — if it wasn’t for the rap-like segments this may be the best song on the disc. The eight plus minutes of “Destroy The World Around Me” has some interesting moments. The pops and clicks of an old vinyl LP are a neat addition to weird, but entertaining, mostly instrumental “Thirteen”.

Mushroomhead do have talent, but sadly it is awash with mediocrity a lot of the time. The vocal similarities to Ian Astbury are uncanny at times, but just not utilized enough. I suppose to make money these days in music you have to stick with the trend that is ‘in’ — but I’m close-minded and stuck in the late 80’s. You will have to be far more open-minded then I am to fully enjoy XIII. Mushroomhead can be found at mushroomhead.org.