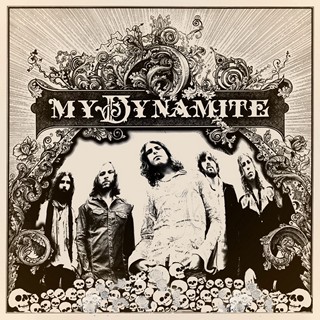 Review:
“My Dynamite are more than just another rock ‘n ‘roll band. My Dynamite are akin to a giant monolithic orb of white light and electric energy. A congregation of highly tuned frequencies that weave and dance across your inner mind. A living temple of radiant power. A vehicle… for the Shining Ones to manifest into your astral plane, to uplift and rid you of burden and sorrow, and ultimately make you wanna shake your ass!”

That description is found on My Dynamite‘s website and are mighty words indeed. And after several plays of this self-titled debut album from these Australian upstarts, their statement of intent is a very accurate summation. They do make you wanna shake your ass — which is surely their way of saying they’ve nicked everything bar the title from The Black Crowes‘ debut Shake Your Money Maker.

This album could quite easily sit in between The Black Crowes‘ 1990 debut and follow-up album The Southern Harmony And Musical Companion. My Dynamite drips with southern harmony, in fact they don’t come much more southern than Melbourne, Australia, and credit surely must go to a band who steadfastly refuse to tread the path most followed by being yet another antipodean AC/DC clone.

Vocalist Patrick Carmody is surely Chris Robinson‘s doppelganger, but lets enough of his own personality shine through in slower numbers like “Singing Stormy Weather” and the more upbeat “Dirty Game” (which shamelessly steals from Bob Seger‘s “Rosalie”) and “Inside Out”. Remember when you first heard “Hard To Handle” or “She Talks To Angels”? — well, Carmody is that good!

It’s not total Black Crowes parodyville though. There are elements of Lynyrd Skynyrd, particularly in the sublime guitar solos, which bring to mind more Gary Rossington than Rich Robinson. And there’s more than a smidge of The Georgia Satellites too. And how often do you get to hear a harmonica solo these days? Opener “Take It Or Leave It” has a doozey. “Big Attraction” is surely the hit single, it swings like a fat chick’s tits when she’s running for the bus — it’s as catchy as Chlamydia, but it doesn’t make you itch.

At 10 songs, My Dynamite is a prime example to other newer acts (and some older ones) that you don’t have to put out an hour and a half of half-arsed, nearly-but-not-quite-good-enough rock and roll. Every track here stands up on its own merit and rightly deserves to be included on this fantastic debut album.

If you’re looking for an album to fill the gap left by the disappearance of bands like those already mentioned, then you could do a lot worse than grabbing this. With the re-emergence in interest of southern rock, My Dynamite deserve to be massive. The South(ern hemisphere) will rise again! You have been warned.

Reviewed by Hetfield’s Mullet for Sleaze Roxx, May 2012