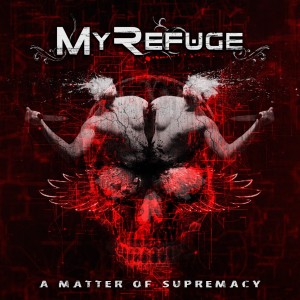 MY REFUGE
A MATTER OF SUPREMACY
Released on June 23, 2015 (Bakerteam Records)

Review:
Too busy — that’s what I think when I listen to My Refuge‘s debut full length album A Matter Of Supremacy. There is just too much going on from the opera like singing from lead vocalist Moz to the orchestral epic like sounding power metal music. I have really struggled to get through the entire album in one sitting and I have tried many times! It just feels like singer Moz is constantly fighting the music to get heard rather than the two working together to make enjoyable music.

I suppose I simply like my music a little simpler, stripped down and grittier, all of which do not describe the music that can be found on A Matter Of Supremacy. I think that the record might have appealed to one reviewer in particular on the Sleaze Roxx roster but that’s probably about it and that’s not me!

I sometimes really enjoy the music on A Matter Of Supremacy with the Iron Maiden like guitar harmonies on many songs but Moz‘s opera like singing just grates on my nerves and often ruins a good portion of the songs. Don’t get me wrong, The guy obviously has a great voice but it gets tiresome to hear his voice battle the often too busy musical arrangements. There is not one song that I really like from beginning to end as there always seems to be some portions that I find quite annoying while others that I really like. A good example is the terrible gothic like singing at the start of “The Raven” before the song turns around into probably the best track on the album simply because the music — which seems to all be going in one direction this time around — and Moz‘s singing complement each other throughout the entire song.

At the end of the day, My Refuge‘s A Matter Of Supremacy is another album that I will most likely never ever be revisiting.

Watch the lyric video of the song ‘The Cage’, taken from My Refuge’s debut album ‘A Matter Of Supremacy’, out on July 7th, 2015 on Bakerteam Records.