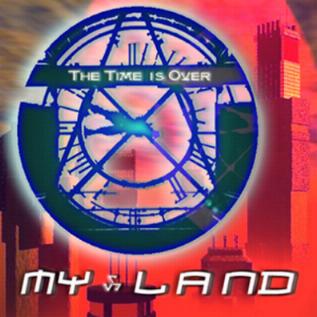 Review:
Awhile back an Italian named Guido Priori sent me a disc that showcased his love for Journey. This time he has recorded original material under the name of My Land, the brainchild of Paolo Morbini, and as you could guess it follows that same arena rock/AOR blueprint.

This isn’t the type of music I usually listen to, it is less abrasive and much slicker then the stuff that usually makes itself at home in my CD player. But this is nice for a change. It is filled with impressive riff after impressive riff and the vocals are thoughtful and soaring. My Land is the type of overblown over-the-top melodic rock that ruled the airwaves in the 80s, the type of music that depleted everyone’s lighter fluid at the local arena show.

It doesn’t take long to get things underway. The Pole Position like riffs to “Love In Chains” start early and immediately spar with the keyboards for supremacy, it is a good opening track. The disc pretty much stays on the same path (with “Stranger In A Lonely Town” and “Take My Heart” being the standouts) until “Under The Sky”, a great acoustical tune that damn near ventures into ballad territory. There are a couple of instrumentals thrown in for good measure, with “Pizza.Mafia E Mandolino” being the best, and even one of the best sounding tracks on The Time Is Over.

If melodic rock fused with keyboards doesn’t interest you, I suggest you keep away. But there is a big market for AOR like this, and fans of that genre will fall in love with My Land. These Italian boys have done their homework, and have also released a commendable album. You can order directly from the band at www.mylandproject.com.