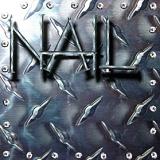 Review:
For a brief period Rainer and Cindy Wiechmann (known here as C and Rhino) were members of legendary Canadian rockers Helix and once they decided to break away on their own Nail was born. Don’t expect to hear the party rock anthems that made Helix so great though, Nail is a much darker band that follows more of a progressive and traditional metal approach.

While listening to Nail it started to become obvious to me that a similar problem plagued another Canadian band called Snake Eyes Seven, and that problem is lack of variety. Throughout the entire CD the tempo rarely changes, the hooks and melodies all start to sound alike, and the album as a whole starts to feel like one long endless tune. The tempo that permeates through Nail is neither fast nor slow, it just seems to plod somewhere in the middle.

Cindy Wiechmann‘s voice harkens back to the female fronted metal bands of the 80s, not as gruff and mean as the current crop of female rock vocalists. The guitars are delivered with the type of crunch one would expect from this genre of music as the songs pay tribute to metal’s past while sounding modern at the same time. The songs represented here are neither horrible nor great, although the rapping on “No Way Out” was getting annoying, with “Carpe Diem” being the only song that truly stood out to me. It is on that song that Cindy displays her power as the group speeds up the pace, it is a refreshing change.

More tempo changes really would have saved this CD for me, not only between the tracks but within the individual songs themselves. Classic metal fans will likely enjoy Nail more than I do.