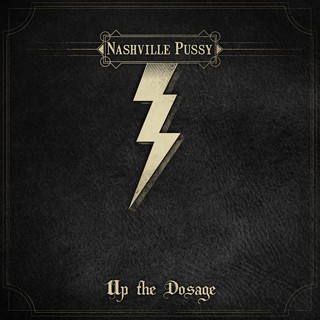 Review:
When Nashville Pussy issued their fifth studio record From Hell To Texas in 2009 they received all sorts of accolades — because it was a great album. From Hell To Texas was reissued in 2012 with bonus content, allowing the Atlanta based quartet to continue touring extensively worldwide — even closing out the summer by opening for their idols ZZ Top.

After a brief hiatus, co-founders Ruyter Suys and Blaine Cartwright reconvened to write material for the new record. Fast forward to 2014 and Nashville Pussy have a new album titled Up The Dosage along with a new bass player Bonnie Buitrago, who was broken in during the absence of Karen Cuda who subsequently left the band in 2012. Up The Dosage has been dubbed Nashville Pussy‘s Back In Black by the band themselves. That’s a tall order isn’t it? Especially because of what Back In Black meant to AC/DC after the loss of their beloved frontman Bon Scott — in the case of Nashville Pussy no such loss has taken place.

Up The Dosage is a sleazy, heavy-grooved, explosive, and boisterous effort that encompasses elements of Let It Bleed, Ace Of Spades, Never Mind The Bullocks, and Highway To Hell — it’s that magnificent. There’s the trademark Nashville Pussy decadent rockers like “Everybody’s Fault But Mine”, “Rub It Io Death”, “White And Loud”, “Pillbilly Blues”, and “Pussy’s Not A Dirty Word” — that’s a given. However Nashville Pussy have expanded their palette with the hardcore influenced “Taking It Easy”, which finds Suys handling the vocals. The track clocks in at a mere 46 seconds and I was left wanting to hear more of that. Then there’s “Before The Drugs Wear Off”, a lyrically brilliant song that sounds like a cross between the The Rolling Stones and the humor of Dr. Hook — along with female backing vocals and a blazing Chuck Berry influenced guitar solo. How could you not love that? Where Nashville Pussy really branched out was with “Hooray For Cocaine, Hooray For Tennessee” which finds Cartwright and company playing an acoustic track that is essentially a bluegrass song. It wouldn’t be a stretch to say that it could have been taken from a Steve Earle record.

Nashville Pussy have released their magnum opus with Up The Dosage, an album where they’ve slowed things down and dialed up the drums — Jeremy Thompson is no longer jockeying to be heard like on previous records. A perfect example of all the aforementioned is “Till The Meat Falls Off The Bone” — it’s simple, slow, groove oriented, catchy and melodic. I was asked a couple years ago what Nashville Pussy album I’d recommend, and back then I would have said From Hell To Texas. In 2014 I would say without question Up The Dosage.