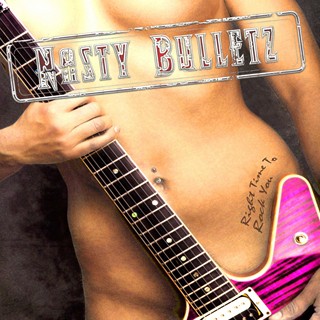 Review:
‘Stuck in the 80s’ Nasty Bulletz proudly proclaims in the first song, “Really Gonna Rock”, off their debut CD Right Time To Rock You. How right they are — everything bad from the ’80s can be found on this CD. The simple guitar riffs sound ’80s like, the drums sound awful and weak, the poor sounding recording resonates like some of the cheap production techniques that certain other ’80s band’s debut albums sounded like, and the vocals are off to state it mildly.

I could probably get through Nasty Bulletz‘ debut CD, but lead vocalist Axl Vanity‘s vocals are so painful to listen to — really painful to listen to. He seems out of tune for most of the album and sometimes tends to talk his way through a song rather than sing. Nasty Bulletz is like a very poor imitation of Van Halen. The guitar riffs, certainly on the first track “Really Gonna Rock”, sound Eddie Van Halen-ish, but there are too many guitar ‘solos’ placed in the wrong spots. However the vocals on Right Time To Rock You are closer to Gary Cherone than any of the other more famous Van Halen vocalists — except Gary Cherone can sing!

I have to come up with something good to say about this German band and their new album. The ‘best’ tracks for me — and I should specify, the best tracks out of 12 mostly terrible ones — are likely “Tonight Is The Night” with its semi-catchy chorus and “Right Between The Eyes”, simply because that latter song sounds different than the other songs. In addition, although I do not like this CD, I tip my hat off to Nasty Bulletz for giving it a shot and trying to keep the glam metal torch alive — although this is one album that I will not be playing again.