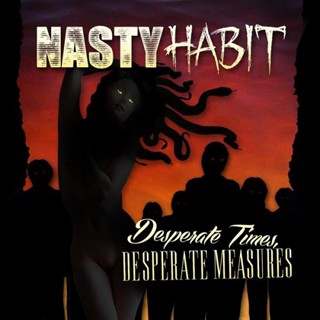 Review:
Nasty Habit sound very similar to an ’80s band that unfortunately I just can’t seem to recall — likely because I wasn’t that into the now unidentifiable group. The closest comparison that comes to mind is Mr. Big, but that group had much more intricate music spearheaded by guitarist Paul Gilbert and bassist Billy Sheenan.

Luckily, my introduction to Nasty Habit was their video for “Don’t Bring Me Down”, which I really liked and compelled me to search for the rest of the band’s music. The fiery guitar licks and hooks from Kenny Ende, coupled with his brother Tommy Ende‘s unique, slow and clear vocal delivery, instantly transported me to that amazing ’80s hard rock era. Nasty Habit obviously aren’t out to reinvent the wheel, and apparently are proud to be playing music similar to some of their ’80s heroes.

Interestingly enough, had I only heard the first two tracks on the band’s new EP Desperate Times, Desperate Measures, I would not have sought out any additional music from the group. Suffice to say, I am not crazy about “Dancin’ On My Tongue” and “Heartless” — they just seem to lack any bite. That is the fine line that Nasty Habit walks. By playing groove oriented hard rock which has some similarities to Van Halen during their OU812 period (minus the keyboards), some of their songs tend to miss the mark and come off as bland and lacking an edge. Had Nasty Habit sped up the music of “Dancin’ On My Tongue” I think it could have been a whole lot better — the guitar solo during the song is quite good and gives a glimpse of what could have been. As much as I like Tommy Ende‘s vocals throughout the majority of Desperate Times, Desperate Measures, I think it’s because his voice isn’t front and center all the time. Unfortunately, on the slower “Heartless” his vocals take center stage and simply cannot carry the song — I’ve listened to it a number of times for the purpose of this review but the time has come to cut the cord and give up.

As much as the first two tracks on Desperate Times, Desperate Measures fail to resonate with me, Nasty Habit hit the mark with the last three songs on their EP. The main reason these songs work better is because the music is a little faster, giving a better contrast with Tommy Ende‘s vocals — which seem to always be pretty much the same pace no matter which song is being played. By having Nasty Habit speed up the music a notch, the listener is also treated to some better guitar licks from Kenny Ende.

My advice to any listeners of Nasty Habit‘s Desperate Times, Desperate Measures is simple — start at song number three. Either that, or listen from the beginning knowing that the EP will get a whole lot better as it goes on.