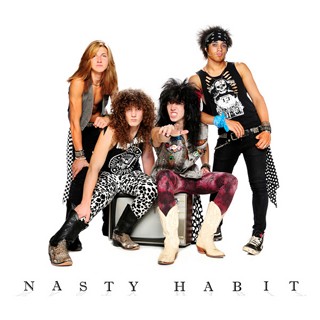 Review:
Formed in 2008 by guitarist Kenny Ende, Nasty Habit are named on their website as the ‘world’s rudest band’… not quite. With an image notably influenced from the ’80s (but perhaps verging on the tongue-in-cheek Steel Panther vibe) and musical influences noted to be Motley Crue, Van Halen, Firehouse, and Slaughter, you might expect Nasty Habit to either be a tiresome replica or simply not very good. Fortunately they aren’t the former, yet have a tendency to stray towards the latter.

The band’s self-titled debut album has an overly amateur feel from the thin mix and unmemorable riffs — except for “Hip Shakin’ Fox”, which seems to be an attempt to mimic CJ Snare‘s self-assured vocals and Bill Leverty‘s signature guitar sound (both from Firehouse). The majority of the songs lack a clear sense of direction — “Cruisin'” and “Saturday Night” both have drum and bass introductions that feel more like out of place fills. The 80 second instrumental “Hot Mess” isn’t hot, but it certainly is a mess — running up and down the scales is boring, attention-seeking and if Kenny Ende truly is the backbone to this band then I feel like they may need some extra support.

The pace finally begins to quicken with “Money Hungry” and the band’s energy is unleashed with a little less ‘wannabe’ and a little more natural performance. It could still do without the chanted backing vocals though — which aren’t even in tune and would reduce their influencing artists to tears. The improvements linger into the Tesla influenced “Love Won’t Wait”, the ballad of the album, and while Tommy Ende‘s vocals still aren’t stunning, you begin to believe in the lyrics a little more. Laidback “Misery Loves Company” also suits a toned down sound and has a funky foundation laid down by bassist Frank Wheeler, but these highlights can’t reconcile the flagging album. I was pleased the New York band chose to close with “Silver Bullets”, as I felt it ended the album on a more positive note and captured the few, but better attributes of Nasty Habit.

Overall Nasty Habit isn’t overly impressive, and an album I found near impossible to get into. There are no rare gems to be found, but some carefree, easy-listening pieces if you’re not too fussy, from a band I think could do much better.