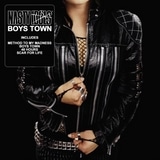 Review:
The original Swedish sleaze rockers have returned, and what a return it is. Boys Town is a great hard rock record that rocks from the start to finish, and Nasty Idols‘ timing is impeccable because 80s rock ‘n’ roll is getting a lot of exposure with new fans and bands lately, especially in Sweden, the new Mecca of glam metal.

Boys Town is in the vein of Vicious, which means that it is full of pissed off and fast songs, with a couple of slower ballads, and it kicks ass. And like Vicious, the band made this album without a keyboard player.

The CD starts off with “Rock Out”, a fast balls-out rocker that leaves nothing to be desired. Nasty Idols continue to rock our ears throughout the next few songs like “Boys Town”, with its infectious slower chorus, the first single “Methods To My Madness” and “Scar For Life”. The next song is a Crashdiet-type ballad entitled “Nite Like This” which is pretty awesome. “Crashlanding” is another great sleaze metal song, but that’s where this disc starts to loose it.

Unfortunately, the second part of Boys Town is not as good as the first. That doesn’t mean that it is bad, because it isn’t, it just lacks the strength and power of the first six songs. I guess the band wanted to impress us early on, but ended up leaving us with something to be desired. Out of those next six songs, “Need The Nite” is the best.

Should you get this CD? Yeah, definitely, its great, and you’ll be hard-pressed to find a better one these days. And, why not pay respects to the Nasty Idols, one of the godfathers of the Swedish sleaze scene. God bless ’em for that!