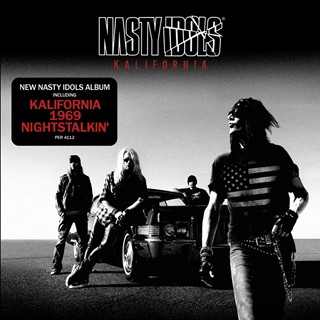 Review:
Kalifornia is brought to you by the band who told us, “We just wanna f**k the girls, drink a lot of booze, and play wild rock music…” For those of you in the know, Nasty Idols debuted right around the peak of the L.A. Sunset Strip years and a bit beyond — 1989-1995. The bad boys looked and sounded the part, borrowing influences from Motley Crue and Guns N’ Roses — except they were not from Los Angeles… they hailed from Sweden! Since then we have seen a huge Sunset Strip sound revival, especially out of Sweden in the last six years, and one could call Nasty Idols the grandfathers of Swedish sleaze.

Most recognizable is vocalist Andy Pierce‘s raspy voice which is perfectly suited for this genre, and who seems to have influenced a few others including ex-Vains Of Jenna frontman Lizzy Devine. The Nasty Idols are the real deal — if you see any interviews with original members Pierce or bassist Dick Qwarfort you’ll know what I’m talking about. They’re not the sharpest tools in the shed, but they live and breathe the sleaze lifestyle.

Nasty Idols reformed in 2006 to test the waters and released Boys Town in 2009, and apparently due to popular demand have released this follow up, Kalifornia. The album wastes no time getting into its groove with the hard hitting single released a few months prior which is the opening track “No More Rules”. Nasty Idols sound very similar here to what they did back in 1991, in fact most of the songs from Kalifornia are interchangeable with any of their earlier releases. If you’re a music snob this might go against your grain. Songs like “1969 (This Ain’t The Summer Of Love)” and “Nightstalkin” are almost over-the-top dumbed-down sleaze, as though the band has made a concerted effort to make sure they sounded the sleaziest in a sleaze rock contest. The songs are catchy, but there is no song writing maturation from their heyday in the hair-metal years. Does a band necessarily require musical maturation to be successful or sound good? Perhaps not, since AC/DC has been pumping out their same brand of hard rock for 40 years and are arguably the biggest band on the planet while Axl Rose went for musical maturation and churned out the sales-disappointing Chinese Democracy.

Kalifornia is straight-forward fun hard rock that should come with a warning label, making its listeners want to put down their newspaper to chug down a bottle of Jack Daniels and hit a strip club.