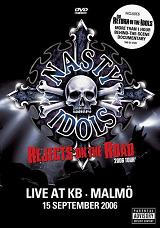 Review:
Seeing as Sweden has become the hotbed for young sleaze talent, it is only fitting that one of the Godfathers of the Swedish scene decided to reunite for a tour. Rejects On The Road chronicles the Nasty Idols 2006 comeback tour (their first in over a decade) with a complete show, an hour long documentary and much more.

The live concert featured on this DVD is a club show that was filmed in Malmo, Sweden on September 15, 2006 and shows that after a decade apart the Nasty Idols haven’t missed a beat. The band still sounds great while dishing out venomous sleaze metal. Vocalist Andy Pierce has a look and charisma that can match anyone half his age while bassist Dick Qwarfort still hasn’t discarded the glam look of years gone by.

Visually there isn’t much to distinguish the Nasty Idols from the countless other rockers hitting the stage these days, but the crowd in attendance (split between long haired males and big haired females) seem to be enjoying themselves. All of the ‘hits’ are here, from “Cool Way Of Living” to “Can’t Get Ya’ Off My Mind” to Heads Down (In Tinseltown)”.

As professionally sounding and looking as the live concert is, for me the highlight of the DVD is the documentary (thankfully they included English subtitles). It is here that you see the band taking everything in stride, able to laugh at their lack of success in the hair metal 80s and enjoy the ride one more time. You get to see the band onstage and backstage, talking about Nasty Idol beer, Gigolos On Parole being the “world’s worst album” and seeing a barely dressed blond throwing t-shirts into the crowd at Sweden Rock Fest (you’d never get away with this in America!).

Rejects On The Road is a well-produced and entertaining DVD. If this is the Nasty Idols‘ swan song, it is a hell of a way to go out.

Buy The DVD:
Purchase at eBay.com