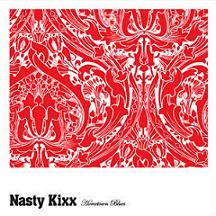 Review:
Nasty Kixx is back with their third set of demos, and it is interesting to see how the band has progressed since I first heard them. With Hometown Blues they have added a keyboardist that expands their sound, even leading to this album getting an official release later.

Taking a look at the four new songs, “Junkyard Scene” is a darker rocker with a great guitar solo and subtle use of the keyboards. “The Next Girl In Line” is a garage-punk song that musically would have fit on Alice Cooper‘s latest release. “The Story Continues” has a great beat and the guitars shine through once again, while “You Were Right” might be the best of the new songs.

The keyboard is a very nice addition; being used just enough to fatten the group’s sound. The guitar mastery of Fabio Esteban is still the strong point of the band, and everything finishes off with an aggressive version of Hanoi Rocks‘ “Tragedy”. All in all the band keeps going in the right direction, and is a worthwhile listen. The website is www.nastykixx.com.