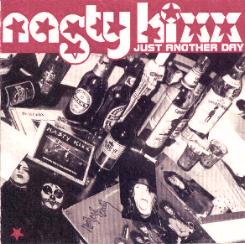 Review:
Nasty Kixx is another of the sleazy bands emerging from Sweden. But whereas
most of the Swedish bands I have reviewed sound like a throwback to the 80’s Sunset
Strip days, Nasty Kixx have a much more updated sound. At first I wasn’t very
impressed with the three songs on this demo, but with more listens it is growing on me,
in the process reminding me of Stockholm Showdown.

The real selling point of this album is the guitar playing, which despite
its punk overtones, doesn’t come across as boring and simple as punk music usually does.
“Feelin’ Bored” stands out the most, as the song is filled with killer guitar hooks and
a pissed-off vocal delivery. The lyrics are also especially entertaining and make this
three-song demo worth a listen. Check Nasty Kixx out at their
official website, they have commercial
potential written all over them.