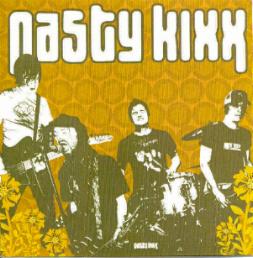 Review:
I was worried about this release, as members of Nasty Kixx had mentioned that they were going to move away from the 80’s rock sound. But I actually find myself enjoying this more then Just Another Day. There seems to be more aggression in the band’s music and Trashcan Dan‘s vocals seem a little rougher around the edges.

The sound is still a mixture of punk and rock, but Nasty Kixx‘s guitar licks are more intelligent then a typical punk band. “The Clown” is a great opener, with harmony vocals reminiscent of the Rolling Stone‘s “Let’s Spend The Night Together”. “Gotta Get Out” is a straight forward number that has a 70’s sounding guitar lick set back in the mix, creating an interesting sound. The band also performs an excellent rendition of the New York Dolls‘ “Personality Crisis”.

The guitar sound is still Nasty Kixx‘s selling point to me; it is simplistic yet complicated at the same time — a sound mastered by great bands of the early 70’s. Once again you can check out these Swedish rockers at their official website.