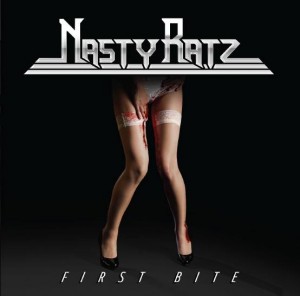 Nasty Ratz‘s debut album is exactly the kind of album that I have difficulty reviewing. First Bite does not knock me over in any way but then again, it’s not bad for the most part either. Every time I listen to it — and I have listened to it quite a bit for the purposes of this review — I enjoy it but I don’t long to hear it again. I got to say that I was a tad concerned when before even listening to one song on First Bite, I saw that three of the four members were credited with playing “keyboards” and “synths” but those concerns turned out to be for naught for the most part. Considering how many members are credited with playing keyboards / synths, luckily only two songs — the ballads “Sharise” and “Morning Dreams Come True” — are drowning in keyboards / synths and while “Morning Dreams Come True” is passable to listen to, there is no question that “Sharise” is the worst song on the album and to be skipped if possible.

First Bite borrows a lot of the best elements from the ’80s — which is of course a good thing — and you might well think that this album was crafted back during the glory days of hair metal. The music is kept pretty simple with tasteful catchy riffs and soaring guitar solos. The main love it or hate it issue is lead singer Jake Widow‘s vocals. I am not that crazy about them and find this is a weak point throughout the album. That being said, Widow‘s vocals are good enough to listen to the album anyways. The best tracks on First Bite are the first four and especially “If You Really Love Me” with its infectious guitar riff, cool melody and catchy chorus; the upbeat “Cut You Off” with the sexy foreign sounding verbal intro from some young woman saying “You know, it was nice but…” and the ripping guitar solos; and, to a lesser extent the speedier “N.A.S.T.Y.” but the vocals grate a bit on my nerves.

Overall, Nasty Ratz‘s First Bite is “alright” but nothing spectacular and like I previously stated, does not really make me long to go back for more. If you do want to support the band, I understand that Nasty Ratz are running a pledge campaign in their native Czech language but one will also be available in English in the near future.