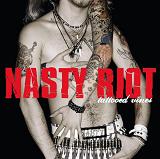 Review:
It took close to thirty years for the Berlin Wall to come down, but it has taken Germany’s Nasty Riot considerably less time to record their debut EP. A mere six months after forming these guys have released a pretty cool collection, not bad at all for a band that is still newlyweds.

For such a young group they sure sound seasoned, even bringing a maturity to the gradual build-up on the ballad “One”. Even better yet are the rockin’ tunes “Bad Bitch” and “Breakin’ The Rulez”. The later has a killer groove that is accentuated by impressive fretwork and a gruff throaty vocal. “Bad Bitch” follows a similar formula, opening with a swampy intro before kicking things into gear.

Late last year I was praising a band named Wolfchild, and Nasty Riot has a similar feel. For being in existence such a short time these guys have really stumbled upon something great. I can’t even imagine how awesome they will be when they streamline their sound. These are the type of songs the Brides Of Destruction should have written, maybe then they wouldn’t have faded into obscurity.

Forget all about bratwurst and schnitzels, Nasty Riot should soon be Germany’s biggest export.