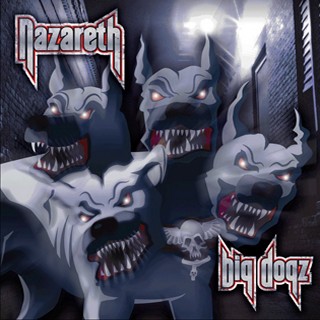 Review:
Big Dogz is the new album by legendary Scottish outfit Nazareth. While the album’s title leaves something to be desired — it is very bush-league — the music on the other hand is surprisingly good. Nazareth has never strayed too far from what they are — a gritty and hard-rocking bar band that have been known to deliver a memorable ballad or two.

Vocalist Dan McCafferty and bassist Pete Angew are the two remaining original members on this bluesy, nicotine powered, whisky soaked, ball-buster of an album. The pair have been consistently releasing records throughout the years with different players, Big Dogz marks their second consecutive album with the same line-up (following 2008’s The Newz). Making their return on guitar and drums respectively are the great Jimmy Murrison and heavy hitter Lee Agnew. Unfortunately Nazareth are still, to this day, best known in North America for their classic 1975 album Hair Of The Dog, and anything since that time has been virtually ignored by the media. In recent years they have released the albums Bogaloo and The Newz which have created an underground buzz stateside and have received critical acclaim in Europe.

The biggest surprise on Big Dogz isn’t so much that the band which features half of the original line-up is still kicking, but the fact that singer Dan McCafferty sounds like he can do this for another 25 years — and he’s already 65! McCafferty today sounds what like Axl Rose wished he sounded like when Guns N’ Roses tackled “Hair Of The Dog” back in 1994. In short, Axl Rose can’t hold a candle to McCafferty vocally these days.

There are many highlights on Big Dogz, and I’ve elected give a brief overview on a few. “Radio” is a melancholy, retrospective, and catchy ballad that captures the power of the airwaves when they reigned supreme. “Lifeboat” is McCafferty‘s take on politicians through the eyes of a rock ‘n’ roll elder statesman, and it’s got more bite and angst than bands half Nazareth‘s age — seriously. “When Jesus Comes To Save The World” is a slow moving number that sounds very British while the lyrical content is deeper than you might initially think.

With Big Dogz Nazareth has come out of nowhere with an album that cannot be ignored. North America… you have been served notice!