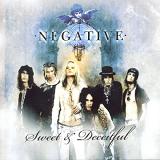 Review:
The majority of the CD reviews on this site are positive. This one won’t be like that.

Sweet & Deceitful isn’t Guns N’Roses, and although that doesn’t have to disqualify a band, Negative just doesn’t pull it off. Apart from maybe one or two songs, Sweet & Deceitful (who the hell came up with this CD title?) sucks major balls.

The record is almost entirely made up of ballads and sappy mid-tempo songs of love, being afraid of it, betrayal, being afraid of it and all crap like that. Generally almost every song is glum, sad, and…erhm…cold. Even the harder songs on Sweet & Deceitful sound like they could be added as ballads to other group’s repertoires. Not that I have anything against this type of music, but on this CD almost every song sounds the same and almost none of them kicks ass. The only exception seems to be “L.A. Feeding Fire”, which is actually a cool piece of rock music. It’s also the only song where the singer doesn’t sound like a suicidal teenage crybaby.

Nothing else can be said about this album. It sucks, it only has one acceptable song on it, and it’s just downright sappy. Some of my friends have said that this is music for “pussies”, and I can’t find a reason to argue with them.