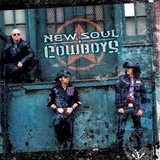 Review:
WARNING! Make sure you have your stereo (or iPod) at a safe level of volume when you start this disc because it kicks in full throttle and rarely lets up! That is a good thing, especially if you are a fan of great guitar driven rock n’ roll. After it warms your player up for a few seconds, then crank this as it should be. New Soul Cowboys are a hard rockin’ trio based in Nashville, Tennessee.

The album kicks into overdue from the first second with “Painted Horse”. IMO, you just can’t go wrong with opening a CD with a killer track about the freedom of blazing a trail on a Harley Davidson. The subtle banjo adds an interesting flavor to the song while the gang vocals will have you chanting along in no time. Toss in a blistering solo and you are off to a great start. “Rebel Highway”, while it slows down just a bit, is another road tune, which has me looking forward to cranking this on a road-trip in the near future. The band’s harmonies are killer throughout and the Skynyrd-esque solo adds a nice touch. Need a dose of wah-wah with your rock? Then “Gamblin Man'” is just for you, it’s not my favorite cut, but not a dud by any means.

Things slow down a bit with the mid-tempo “What It’s All About”, a song about love and the emotional rollercoaster it takes you on. “Somebody’s Missing” has ‘hit’ written all over it as Anthony Gomes pours everything into this heartfelt track. I for one can really relate to the lyrics of this. The rhythm section really lay a groove right in the pocket while Gomes‘ soulful solo is just the perfect accent to the perfect song. Up next we got some funkified Jimi Hendrix-esque music in the form of “Purple Whiskey Sack”. Gomes really shreds on this song, something guitar lovers will dig.

Ahhh, the revving of a Harley Davidson will get anyone’s blood flowing and flow it does when “Born To Ride” kicks in. It should be no surprise that a majority of this album has the flavor of the road on it as these guys are road dogs to say the least, putting in over 200 dates a year all over the world. “Carolina” is a soulful country infused track about the one who has that special place in your heart, a universal song that everyone who has experienced love can feel. The first time I heard the “You Are Amazing” played live about a year and a half ago, it hit me right in the heart and made me realize it was everything I always wanted to say to the person that I was dancing with, but couldn’t piece together on my own. Live it was chock-full of soul and emotion and the studio version, with its added orchestration and acoustic fretwork, takes it to an even more emotional level – perfect is the only way to describe it.

The title track continues with the road theme and is spiced up with some funky guitar licks throughout. My favorite rocking number is up next in the form of “Chicken Bone Cross” featuring some ‘man-possessed’ vocals and lyrics about a voodoo man and the blood red moon. It seems like someone spent a little time in New Orleans if you ask me! “Losing You” is the closing track, a mid-tempo cut about losing that certain person who holds the keys to your heart. The keyboards spice it up to perfection and I really like how it builds around the two minute mark, making you think you are in for a tear jerking solo only to change back to mid-tempo for a bit before solos complete the song.

For just being a trio, the New Soul Cowboys have a sound as full as a ten piece, with harmonies for days, an ace rhythm section and a frontman who is nothing short of a virtuoso on guitar and whose vocals are as soulful as they are rockin’!

Reviewed by Justin ‘Crash’ Crafton for Sleaze Roxx, May 2009.