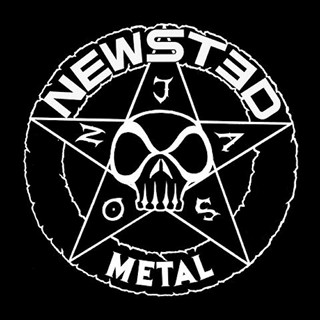 Review:
I picked up this EP on a whim when I happened to see it in the new “metal” section of a local HMV store. I had previously seen the debut video for the first song “Soldierhead” and liked what I had seen/heard despite Jason Newsted‘s “rough” styled lead vocals. The opening track “Soldierhead” could easily have been found on Metallica‘s …And Justice For All CD — if you traded Newsted‘s vocals for James Hetfield‘s I think most people would think it is a Metallica song. While you might think that all of the songs on Metal would follow that Metallica type vein, the rest of the songs are more riff based, a little slower and it seems that Newsted settles into his own musical style and sound.

All of the songs on Metal have a dark feel to them. “Godsnake” is likely one of the slowest songs on the EP and my least favorite of the four tracks. I still like it, but one track has to be at the bottom. “King Of The Underdogs” starts off slow but builds and picks up more and more as the song progresses before slowing down near the end. It has a nice riff on which the song is built upon. The only annoying part for me is the gang vocals for the chorus at the end of the song — not necessary or needed for the song. My second favorite track on Metal, after “Soldierhead”, is the last one “Skyscraper”, which is also the longest one on the EP. It has a great infectious riff to it and just like the rest of the songs, feels nice and heavy! Newsted‘s rough styled vocals seem to fit nicely in the song.

It seems that these days I am going from one good new CD to a great new one — Metal would fit in the “good one” category. When listening to Metal, it seems to me that Metallica should have given Jason Newsted more freedom to contribute songs when he was in the band. The man has talent and could have added a new dimension to Metallica had he been given a fair opportunity. Give Newsted‘s Metal a chance, it may just grow on you.