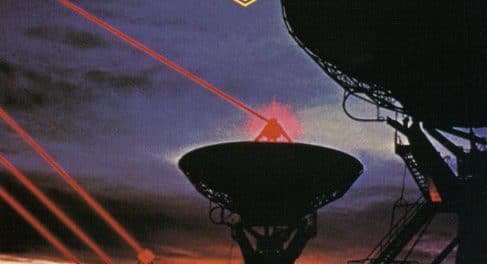 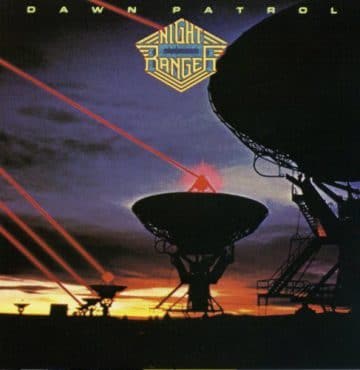 Review:
While most of the free world came to know San Francisco, California rockers Night Ranger in 1983 by way of massive hit album Midnight Madness (which featured “You Can Still Rock in America”, “When You Close Your Eyes” and worldwide AOR classic “Sister Christian”) it can easily be argued that 1982 debut Dawn Patrol is where the band flexed every available muscle in their rock and roll arsenal.

Clocking in at just barely over forty minutes, Dawn Patrol presented for perhaps the only time in the band’s career every facet of their talents -– great songwriting, great musicianship, beyond exceptional vocals, and the ability to blend melody and hard rock. Never mind that Night Ranger possessed Brad Gillis and Jeff Watson, a pair of guitar magazine regulars who together could cover any style of rock and metal guitar, but also two incredible singer / songwriters in bassist Jack Blades and drummer Kelly Keagy, as well as Alan Fitzgerald formerly of Montrose, Gamma and Sammy Hagar’s solo band on keyboards. To say that musically Night Ranger was stacked would be like saying KISS put on a show -– it just doesn’t come close to properly describing the band’s musicianship yet somehow like few other bands with great musicians, the band also knew how to create great mainstream rock songs.

It’s no surprise that kickoff single “Don’t Tell Me You Love” hit rock fans hard. With its “all your eggs in one basket” package of everything that is great about the band tossed in, Night Ranger came out swinging. Even the overlayed keyboards have an oddly soothing yet at the same time crushing quality — the opening power chords are everything a fist pumping concert anthem should be. Toss in clever lyrics leading up to a simple anthemic chorus and you have the perfect song… right? Well not quite. Just when you THINK it can’t get any better Gillis and Watson drop in for a tag team of guitar madness blending pure melody and outright tasteful shredness to create one of rock’s all-time classic lead sections. Most bands would be overjoyed to have ONE killer guitarist. Night Ranger were blessed to have TWO and if any Night Ranger track other than “You Can Still Rock In America” ever benefitted from the guitar tandem, it would have to be “Don’t Tell Me You Love Me.” Not a bad way to introduce yourself to the world. But as cool as the band’s debut track is, it is still only a tiny piece of the near perfect album that Dawn Patrol turned out to be.

Given the tough task of following behind “Don’t Tell Me You Love Me”, second album track and single “Sing Me Away” is the type of rock track that in the ’80s would be just as perfect on a teen movie soundtrack as blasting from a cruising car full of kids on a Friday night during the same decade. Driving without being too heavy, the track benefits from a blending of catchy melodies, a great chorus full of harmonies, and once again amazing, tasteful lead guitar. It’s the type of song that tells the kind of story any kid filled with dreams can soak up and be inspired by and throughout the band’s career, the type of writing Night Ranger were best at. Just a quick glance at Dawn Patrol reveals a whole treasure chest of such tracks -– tunes that tell believable tales while all taking on a life of their own. Songs like “At Night She Sleeps”, “Young Girl In Love” and “Penny” fit into this category of catchy, contagious tunes that were relatable tracks for ’80s youth to latch on to and not just the guys, but the girls as well. But certainly if along the way the guys thought things were getting, well, a little too wimpy, Dawn Patrol also provided enough bombast a la pieces like “Eddie’s Coming Out Tonight”, “Play Rough”, and Night Ranger” to prop up any softened up machoness.

Dawn Patrol carries enough weight to even lift a ballad like “Call My Name” and carry it into the heaviest of scenarios. Sure the vocals are mostly sweet and there is no way of hiding the out front keyboards but looking back on the ’80s, it stands up amazingly with other albums Night Ranger released during their peak period. Just based on songs alone, the album as a whole kills other more popular (and in some cases legendary) hard rock albums of the hair metal era which is saying a lot because despite being perhaps their most complete album, Dawn Patrol is not close to even being Night Ranger’s most successful release. Then again, it is hard to stand up as a top album when you are only one of several released by a band capable of writing great song after great song after great song. To this day I can still remember attending the 2001 edition of Atlanta’s original Music Midtown Festival and falling asleep to Steppenwolf playing on a small side stage only to wake up in time to catch an entire set by Night Ranger on the same stage. After what seemed like over an hour of familiar song after song, my friend Joe and I started to try and figure out what could be left only to slap our heads with every bit of “How did I not think of that one?” reaction we could muster time and time again. Honestly, we thought Night Ranger would never run out of songs that day.

So yeah, Night Ranger had bigger albums and bigger singles including soundtrack songs and even though years later, half the world might not even realize that some form of Night Ranger still exists, the band still release albums with at least half the tracks better than anything over half their ’80s contemporaries have put out since their peak. Of course, the chance of Night Ranger rising up to the level of their former glory is pretty much something only possible as a storyline in an inspirational Night Ranger tune but then again, in 1982, they put out as close to a complete album as they could only to release better selling albums several times over with far less quality material per release in comparison to Dawn Patrol. So I would have to guess that anything certainly is possible. But if not, that’s OK. Most bands would give up their bass player for a debut album like Night Ranger’s Dawn Patrol, never mind a run of several commercially successful albums. And for us fans? Just one listen is a reminder of how great the album was in 1982 and how heart pumping it is to crank thirty-five years later.

But as nice as it is to get my heart pumping like the old days, sometimes it’s just comforting to sit back, close my eyes, let the music sing me away and remember that while you’re never too old to rock… OK, it’s true, you’re never too old to rock… but eventually, most of us have to take a break every once in a while. Luckily, Dawn Patrol is just as good of an album to listen to when relaxing as it is in full on high energy rock mode. And while I don’t get the same feeling I did as a red-blooded American male teenager gearing up to take on the world (ok to be honest these days I’m happy just to get out of bed in the morning on the first attempt, never mind take on the world most days), the songs on Dawn Patrol still remain as uplifting and inspirational and catchy as they ever did and that is a testament to the greatness of an album that is consistently solid from the opening track to the last.

Night Ranger‘s “Sing Me Away” video: