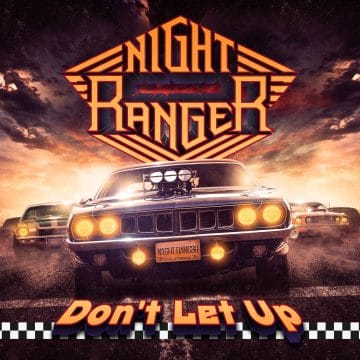 Review:
This past summer, my wife and I journeyed, on our honeymoon I may add, to New York City. It was an incredible experience. We rented a condo in Manhattan, two blocks from Times Square. We did our best to blend in and not look like tourists. In this week that we spent in NYC, we took in so many adventures, or misadventures depending on which one of us you ask.

On the day of our flight to NYC, we made a last minute decision to take in a concert at Coney Island on a Thursday night. This concert would be Rick Springfield, Night Ranger and The Romantics. My main desire of this show was to see Night Ranger. I have been a Jack Blades fan for many years dating back to his days in the Damn Yankees. I was also intrigued to see Keri Kelli play with the band, as I had seen him several times with Alice Cooper. I have had the opportunity to meet Kelli a couple times. Funny enough, my first meeting with Kelli was at a Toronto Blue Jays game at the Rogers Center dating back to about 2006-07. I ran in to an old acquaintance, musician Damon Johnson who happened to be playing with Alice Cooper as well. Johnson was kind enough to introduce me to Kelli and Cooper bassist Chuck Garric as well. Kelli was very friendly and that really stood out to me, so I have tried to follow Kelli in whatever venture he is taking part in. Of course, Night Ranger is rounded out by guitarist Brad Gillis, vocalist/drummer Kelly Keagy and keyboardist Eric Levy. It was at this show that I purchased Night Ranger’s last album High Road. I absolutely loved it, so I was anticipating this release for months upon the initial press release from Frontiers Records.

I desperately attempted to find Night Ranger’s latest album — Don’t Let Up — at my local record store. Now that’s a laugh in itself. Local record store? Good luck. That’s another topic I’ll touch on at a later date. So off to Amazon I went. Thank goodness. There it was for me to purchase. Then of course, my next thought upon it’s arrival is I’ll have a few listens and do my latest review.

The first track “Somehow Someway” grabs your attention immediately with a catchy guitar riff. A quick guitar solo then presents itself just before the vocals appear. The lead up to the chorus is very well crafted in true harmonized Night Ranger fashion. The chorus features a great gang vocal. Melodic guitar leads are then played underneath the second verse. A cool bridge is sang before a great guitar solo is played by Gillis. My assumption is that it is Gillis. It seems Gillis is more of a whammy bar guy than Kelli. At the end of this cool solo is a harmonized lead by both Gillis and Kelli. A great edgy riff is played leading into a nice acoustic interlude. The drumming of Keagy is very tight and drives this particular song along nicely. Guitar leads are heard underneath the chorus as the song comes to a close.

“Running Out Of Time” is the second track and starts with more great guitar riffing, sort of in an early ’80s vein. The band then kicks in. Just before the verse starts a quick lead, then guitar harmonics introduce the listener to what is to come vocally. The band dynamically backs off with drums and bass driving the verse, letting the cool vocal build into the pre chorus. A quick stop and the band is into the chorus. Just before the solo a cool vocal change which adds a nice depth and build into a great guitar solo.

“Truth” starts off with a tight melodic guitar riff as Keagy keeps the beat. The verse cuts in with the band playing along to great vocal phrasing. The chorus is a catchy sing along with very well crafted lyrics. Leading into the second verse whispering is heard in the background. Another great lead vocal phrase leading into the guitar solo that is reminiscent of Robin Zander from Cheap Trick. It appears Kelli plays the first portion of the solo with Gillis ending it. There is somewhat of a difference in the guitar tones. Very well executed solos from both players. It really adds a nice depth.

“Day and Night” has a distinct heaviness to it, with Keagy pounding on the high hat and snare with cymbal crashes in the appropriate spots. There is a quick lead bringing the verse in quickly. Keagy’s vocals sound fantastic as he plays out the verse on floor tom and snare. Blades comes in on the first portion of the pre chorus/bridge, then Keagy and Blades are heard together leading into the killer chorus. Great backing vocals by the band as that chant an “ohhhhh” together in unison. Gillis does an interesting pick tapping part that now goes into a killer riff. Keyboardist Levy is heard throughout this portion. The arrangement of this song is very well thought out, with a lot of instrumental changes. Gillis does a great solo using the whammy bar, than Kelli ends off with some fast ferocious licks on his Les Paul. A bit of a breakdown occurs and the band leads back into the chorus. This song shows how musically talented and tight this band really is.

“Don’t Let Up” starts with a Keagy drum roll in and the two guitarists play a subtle harmony lick over top of a chugging riff. Blades‘ vocals come in quickly and like many of this man’s vocal lines, the verse is catchy and leads nicely into a great vocally catchy chorus. Another gang vocal is heard in the chorus. “Don’t let up on the big picture baby” sounds evidently commercial and is easy to sing along to. As I’m walking away from this review, to take a quick break, I find this line stuck in my head. This song is arranged well and the transitions are smooth. A great galloping vocal line is sung by Blades which turns into the same galloping line with the guitar leading into the solo. The solo ends and Blades is heard vocally, strictly on his own with a slight effect behind. Blades does a nice job of sounding desperate as he phrases his parts perfectly.

“Won’t Be Your Fool Again” changes the dynamic of the album slightly. A nice change I may add. A great honky tonk guitar riff starts this one off and the band kicks in with piano and slide guitar. The vocals come in dynamically as the band lets the vocal breath. Another great build up into the chorus. It is proclaimed “Won’t Be Your Fool Again” as a falsetto vocal is underneath saying “No more, No more”. This is just a really great rock song. It kind of has that Honky Tonk Woman vibe to it. Great tongue in cheek lyrics. The guitar solo is very bluesy and throaty at times. More slide guitar ends the solo off and the band is back into the chorus.

“Say What You Want” starts off slowly, but builds into a great rock song. The thing I find about this album, that I love so much is how well this band plays together. The changes and build ups are so defined. This song is a perfect example of that. “Say what you want, but I won’t go away” is proclaimed in the chorus as quick guitar/keyboard riffing follows, which compliments the vocal so nicely. The vocal phrasing is spectacular. The song takes another turn before the instrumental break and a great vocal change is heard. The structuring of this song is so well thought out.

“We Can Work It Out” slows things down and showcases a Beatles influence. When I hear this, Blades work in Shaw/Blades comes to mind. I wasn’t sure about this track at first, but it has really grown on me. The chorus is catchy. There are really nice interludes between the vocal delivery. A great acoustic guitar solo really compliments the feeling of the song. Very well done.

“Comfort Me” starts out with yet another amazing ‘80’s sounding opening lick. Keagy then accompanies with a predominant drum piece leading into the musical interlude before the verse. This is a another typical, yet catchy Night Ranger song with a fantastic chorus. Overlaid guitar parts are heard though out. This band has a formula and does it well. Night Ranger really keep the listener’s attention. Throughout the chorus, the band is heard singing “C’mon, c’mon’ c’mon”. I am sure this song will go over great live. There is then a great melodic solo with Levy trading keyboard parts off with the guitar. At the end of the song, Kelli and Gillis trade off guitar leads once again.

Keeping the flow of the album going, “Jamie” starts off with yet another guitar riff. The chorus is infectious and phrasing of how “Jamie” is sung is very inventive. Great guitar work on the solo by both Gillis and Kelli. I am quickly finding that I love Gillis’s use of the whammy bar. It’s very precise. Gillis and Kelli compliment each other so well. The diversity between the two players makes for such great color throughout every song. “Nothing Left of Yesterday” ends the album off nicely. Another Beatles styling. Slow and melodic. Levy’s piano is heard beneath the beautiful verses. Night Ranger is so great at writing songs that are so easy on the ears. The guitar solo has a Brian May feel to it. Straight and to the point, but memorable.

What more can I really say about this album? It has not left my player since it came in the mail. I hear something new every time out. Which to me, as a musician myself, just leaves me wanting more. So much great music going on through out. The changes are amazing. The musicianship is astounding. Vocally, Blades and Keagy are top notch. For fans of this style of melodic hard rock, this album is a must have. I am really hoping for a Toronto date in the near future because I’d really love to hear some of this material live.