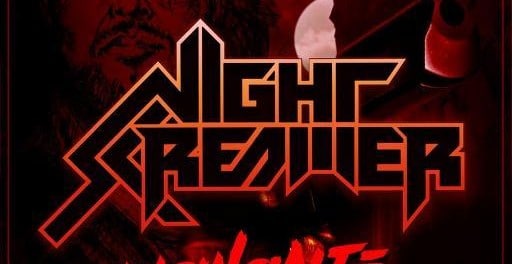 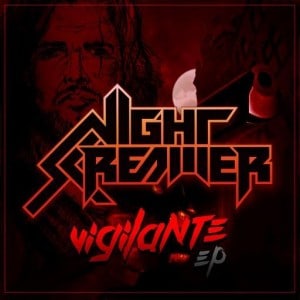 Review:
It seems that old school heavy metal is making a comeback these days thanks to older disbanded bands reforming and revisiting their past such as Shock and many up and coming bands such as Lady Beast, Midnight Malice and apparently Night Screamer.

Night Screamer emanate from England’s main city London and definitely have been influenced by old school ’80s style heavy metal. While I enjoy all three songs on Night Screamer‘s Vigilante EP and despite listening to those songs numerous times for the purpose of this review, I find that none of the songs really stand out in my mind. Don’t get me wrong. All of the three tracks offered by the English band are enjoyable to listen to and certainly well executed but there seems to be something missing to get me to remember them. Perhaps it is the lack of really memorable chorus for each of the songs. Lead vocalist Gadd‘s singing sounds like your typical fare for this kind of no nonsense heavy metal. The songs are well constructed and usually revolve around some solid and memorable guitar riffs.

Out of the three tracks, my favorite is “God Of War” with Gadd‘s more melodic singing, followed by the epic “Sacrifice” and finally “Getaway,” which tends to have a few weaker parts such as the chorus portion. Of note, I did not realize how long the tracks must be until adding the video for “Sacrifice” to this review which clocks at almost nine minutes. Oddly, the song only clocks in at a little more than six minutes when you play it from Night Screamer‘s website. Whatever the case and to the band’s credit, a track such as “Sacrifice” does not feel long at all and had I not known any better, I would have thought that it was closer to four minutes in length since it feels like it goes by so quickly.

Overall, Night Screamer have delivered three solid old school heavy metal tracks that will likely satisfy anyone who enjoys that genre. It would have been nice to have a few more tracks but three solid songs are better than none!