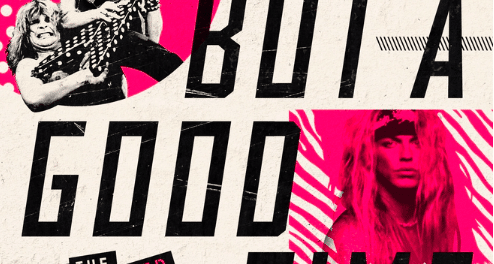 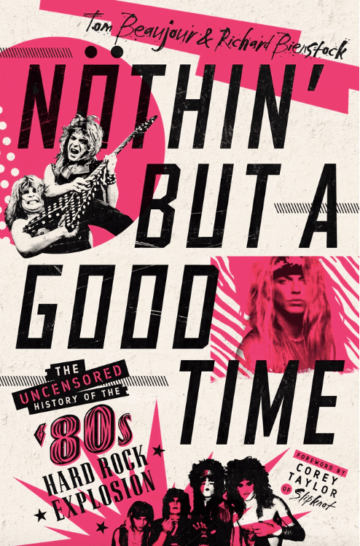 TOM BEAUJOUR AND RICHARD BIENSTOCK
NOTHIN’ BUT A GOOD TIME: THE UNCENSORED HISTORY OF THE ’80S HARD ROCK EXPLOSION
To be released on March 16, 2021 (St. Martin’s Press)

Review:
When books come out about the 1980s, especially the hard rock music, I tend to be skeptical. Usually when the books are written, it is by authors who either hated the music and bands, or they just want to make fun of the clothing styles, the lyrics, or the over the top music videos. However, Nothin’ But A Good Time does none of these, and the writers get a well detailed look into the music scene of the time, which started out in small clubs to worldwide exposure for many bands. The co-authors in the introduction make the point that they are getting those who were interviewed to just tell the story, without prejudice, and not make them apologize for their actions. It is this objective take that makes this writing a must have for music fans in their collections.

The book interviews many music personalities from the decade, from original members who were not with the bands for their worldwide and national exposure, the clothing designers, and even record executives and managers. Some of those in the book include members of Skid Row, Warrant, Cinderella, Dokken, Vito Bratta, Taime Downe, the Nelson brothers, and more. The beginning of the book has several pages filled with names of the people interviewed and their job titles for a quick reference to go back to when needed. They give their insights on the early days of playing in bands and switching members from other rival groups to create the vision that would make it to MTV and beyond, all in a historical timeline starting with the success of Van Halen in the late 1970s. It also covers the scenes in California around the Sunset Strip, to the East Coast bands like Twisted Sister helping make the non-L.A. clubs another road to success. The success of Twisted Sister and Quiet Riot are considered the groundbreakers for bands like Ratt, Poison, and Mötley Crüe to start leading the charge of the hard rock sound, their colorful stage shows and antics on and off stage, to the success of music videos helping fans flock to the record stores and arenas are covered.

The most wonderful thing about this book is that the tales are told by the people who were involved in the scene. Not only are there musicians, but the managers and record people who helped promote the bands giving their take on the situations and events, along with fashion designers. Plus, there are wonderful rock stories throughout the chapters, like the time Axl Rose chased David Bowie down the street from the Cathouse bar threatening to beat up Bowie, to tales of how the bands engaged in “poster wars”, where they would staple flyers of the upcoming gigs throughout the towns, to the stories of touring once they got record deals. Another interesting detail in the book is how Warrant frontman Jani Lane‘s jacket from a video inspired Michael Jackson to seek out the same designer for his own fashion statement. The book covers the importance of the 1988 film The Decline of Western Civilization Part II: The Metal Years, to the different guitar styles players were using, The Moscow Peace Festival, the rise of the power ballads (which is pointed to why the female fans bought more records than male listeners), and the over saturation of the bands towards the end of the decade.

The objectivity, again, is what makes this book more of a historical piece than a commentary. Towards the end of the text, the topic of why the glam bands ended is argued from different standpoints. The topic does not just point a finger at grunge music, but some interviewed discuss possible other reasons, such as the change in how sales were calculated (the beginning of SoundScan), to band members just not getting along with each other made the music suffer, the addictions from nonstop touring, and even the spotlight on AIDS are all suggested. The book ends on an upbeat note, covering how some of the bands are still going strong, being labeled as “Classic Rock,” where gigs are now played in casinos, festivals, and cruises, where younger audiences are following along with the parents who lived through the era. Some of the artists discuss how they ventured into other aspects of music, learning new skills to stay relevant.

This is a magnificent, well discussed book for those who love the hard rock music from the decade (like I do), and at over 600 pages long, there is plenty of detail in the topics. The book doesn’t just cover bands like Stryper, Faster Pussycat, and others, but also how the labels supported (and sometimes did not support) the bands in their creative journeys, to how females were viewed as musicians, and what the bands thought of each other’s successes (and failures). The only omissions are covering the “Parental Warning” labels put on the records, thanks to the P.M.R.C., and the trial of Judas Priest, but these parts can be found in many other books in detail, so it doesn’t diminish the overall quality of the text.

Finally, there is a book about the 1980s hard rock scene that is not offensive for us fans who not only loved the music then, but still love it now, and as told in the title, readers will indeed have a good time with this book.