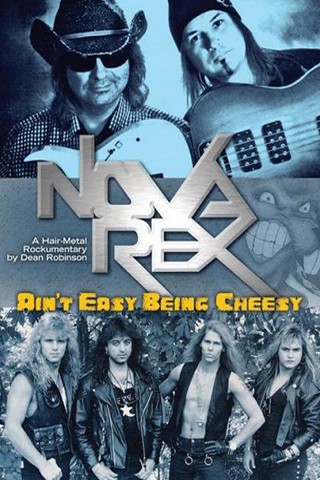 Review:
The hair-metal rockumentary Ain’t Easy Being Cheesy is a look back at the history of Nova Rex. You’re probably thinking to yourself… Nova Who?? Well, Nova Rex were an ’80s hard rock band that formed in Canada, drifted to Florida and L.A., before finally settling down in Indiana and proceeded to watch their world crumble when grunge led to the massive mid-’90s hair-metal extinction.

A look back on the career of a regional band such as Nova Rex probably isn’t going to appeal to many people — but if you approach this as an introspective on the infamous hard rock era it becomes an enjoyable film. When I say Nova Rex packed clubs during their heyday, younger readers may think ‘yeah, right’, but you have to remember that this was a different time. In the days before internet, YouTube and DVDs, people actually had to venture outside to get their hard rock fill — meaning that every city/region had their own local heroes that were superstars inside their territory. Nova Rex says it best on Ain’t Easy Being Cheesy, “the difference between us and a band like Def Leppard was just numbers, instead of a 1000 chicks after a gig we only had 20.” And there lies the charm of this retrospective DVD, the fact that in the late ’80s even relatively unknown bands could (and did) live the rock ‘n’ roll dream.

Nova Rex share some interesting stories throughout Ain’t Easy Being Cheesy as they discuss the importance of the glam look and later their struggles with the changing music scene. It is comical to watch the band in some of the older interviews, sporting their Budweiser beer costumes, refusing to succumb to the grunge invasion only to… you guessed it, change their sound and look in a last ditch effort to fit into a scene that would never accept them. A word of advice from the guys within Nova Rex, ‘if you’re going to try and copy something it is already too late, stay true to what you are’ — but in hindsight that was easier said than done.

As for the music, Nova Rex had good credentials as guitarist JP Cervoni once played with Jimi Hendrix drummer Buddy Miles, and they also had a handful of killer tunes like “Children Of The Night”, “Bring The House Down” and “Turn It Up Loud”, but their attempt at grunge was disastrous. A revolving door singer policy probably hurt Nova Rex more than anything, but it didn’t stop members from appearing on the Montel Williams TV show, refusing to go on stage unless alcohol was provided (despite the musician in question refusing to drink), sleeping with countless women and hanging upside down while nude in hotel rooms.

Such was the life of Nova Rex, and it makes you wonder how many thousands of other bands have similar stories to tell. While watching Ain’t Easy Being Cheesy you’ll probably wish for that entire ’80s hard rock scene to return, complete with the big hair, countless women, great music and most importantly… FUN!