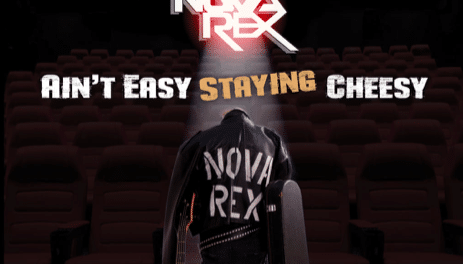 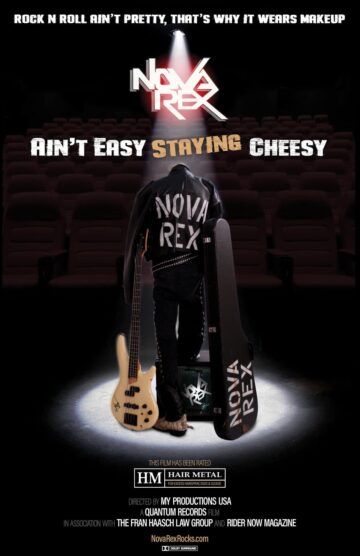 Review:
When it comes to marketing a band, I think bassist Kenny Wilkerson of the band Nova Rex is truly a genius. This is a man that was able to attain sponsorship from Budweiser back in the day. Nova Rex is even featured in the Smithsonian. Back in the late ’80s / early ’90s, Nova Rex put out some very impressive, tongue-in-cheek hair rock albums. I’ll even go as far to mention that Nova Rex are number 48 on VH1’s Top 50 Hair Rock Bands of all time. In my eyes that’s pretty impressive.

Of course, how can you forget 2011’s documentary which is featured on The Documentary Channel and Netflix (on short run back when they still mailed DVDs) entitled Ain’t Easy Being Cheesy? Here we are in 2022 and yet another documentary on Nova Rex entitled Ain’t Easy Staying Cheesy will see the light of day later this year. Kenny Wilkerson was kind enough to forward me a copy and let me tell you this is a really enjoyable watch.

Of course, we see the early years of the band which also featured guitarist and founder J.P. Cervoni and talks of the multiple singers the band had in the past. We hear about the band’s journey in Florida and what led them to Indiana where the band would gain an even bigger following and notoriety. Nova Rex would play wherever they could to get exposure and it really worked to their advantage.

What I find interesting about the band’s story is that Wilkerson really played the part of the stereo-typical rock star. He’s created a larger than life persona that frankly I believe is what an ’80s rocker should be. He talks, walks, eats and sleeps with the rock star mentality on his brain 24/7. If you’ve ever heard him speak or have spoken to him, he really brings that attitude forward. There is a great story in this documentary where Wilkerson was on an airplane, sitting beside the Cheesecake Factory founder long before the company became a household name. One of the flight attendants kindly asks Wilkerson if he is a rock star. Of course, he says “yes” and she kindly asks him for an autograph. Within seconds, there is a buzz on the plane that a famous rock star is on the flight. In the end, Wilkerson walks off the plane feeling ever so famous with cheesecakes in hand. I think it is safe to say that Wilkerson has a gift and clearly he could sell ice cubes to Eskimos. Can I say that? Well, it’s only a figure of speech with no intention to offend anybody and frankly it was the best analogy I could muster up. It kind of goes hand-in-hand with the whole ’80s rock theme.

To characterize Ain’t Easy Staying Cheesy, I’d say it brings you back to a simpler time when hair rock ruled the airwaves and when cellphones, internet and music streaming weren’t even on the rock n’ roll radar. We’d watch MTV‘s Headbangers Ball on cable TV or as stated in the movie on satellite TV. Who remembers those huge satellite dishes planted in so many American backyards in the late ’80s / early ’90s that stuck out like a sore thumb? This movie and the band for that matter are just pure, clean fun. Isn’t that what we all want in life?

Of course, the movie brings us to the present. What is Nova Rex up to these days? Well let me tell you, Wilkerson is still firing on all cylinders. Cervoni has retired, but don’t be disappointed as his replacement is none other than former Britny Fox guitarist Greg Polcari who honestly has the chops. Can this guy shred or what? The drummer you may wonder, why it’s Mr. Sawbladehead. For those that don’t know Mr. Sawbladehead, he is not only a killer drummer but a very unique artist, who has a gift for making creative functional artwork and stage props for many rock artists including himself. Mr. Sawbladehead is a certified welder and his designs are truly amazing. Of course, in true Nova Rex fashion, the vocalist seen in a good portion of the movie is Adrian Adonis, but my understanding is that Adonis has moved on and the band is currently fronted by The Babys singer John Bisha.

I don’t want to give away too much of the movie, but I think you get the gist. Movies like this excite me. Hopefully that is clearly obvious in this review. I feel that it is a great continuation of Ain’t Easy Being Cheesy. The movie gives you, the viewer, a good synopsis of the band’s past and then moves forward to show the viewer what has transpired since 2011. That’s 11 years of pure rock n’ roll debauchery to capture in just an hour and a half. Not only does the movie show the fun side of the band but also gives a general idea of Wilkerson on a day to day basis. Not only is he a musician but also a man that is working Nova Rex 24/7. I am not sure if he ever actually sleeps. Of course, that would be a question for him. With all that said, be on the lookout for Ain’t Easy Staying Cheesy in the coming months. You will not be disappointed.

Nova Rex will drop a brand new video/single for the song “Time Is Up For You” to coincide with the release of the documentary on Tuesday, April 26th at 5 pm EST.

Production:
Directed by My Productions USA