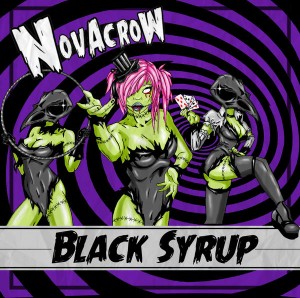 Review:
Some albums are just easy to review. You hear a few notes and you just know that you are going to like what you are going to hear next. You wait to hear the lead singer’s vocals because that’s always a make or break moment for a song and assuming you like the singing, the only question left is whether the band can sustain what first drew you in all the way to the end.

Novacrow‘s debut EP Black Syrup is one of those albums. Right from the opening “Oh yeah” intro and cool bass beat to the drums and heavy guitar kicking in on opening track “Fat Frog”, I am hooked to see where the song goes. Lead singer Kitty Staunton‘s singing is next and draws me in even more. By the time that the chorus “Fat Frog” with the monster guitar riff comes in, I need to hear the entire EP before doing anything else. All I can think of is that Novacrow have a monster rhythm section, big guitar riffs and a distinctive female singer whose voice is strong enough to pierce through the stellar music. The group is also not afraid to take some risks and buck convention with its arrangements. I was actually surprised that I liked the opening song “Fat Frog” so much because Novacrow play a brand of rock that definitely has some modern overtones to it but at the same time retains the greatness and attitude of sleaze rock. In a way, the group reminds me of a cross between Halestorm and lesser known but mighty Lionsault.

Novacrow describe themselves as “For Fans Of: The horror influences of Alice Cooper and Rob Zombie. The sounds of Alter Bridge, Godsmack and Alice in Chains. The entertaining live shows of Skindred. Female fronted bands with attitude, such as Joan Jett & The Blackhearts, My Ruin and Halestorm.” I can’t say that I am that familiar with Alter Bridge, My Ruin or even Godsmack but maybe I should be when I am listening to Novacrow‘s debut EP! Although Alice In Chains are mentioned as a group that Novacrow sound like, I really don’t hear many similarities between the powerful music from Novacrow and the more somber and subdued grungy Alice In Chains. However, I do hear plenty of attitude  similar to Joan Jett and Halestorm.

Getting back to Novacrow‘s EP Black Syrup, the next two songs “Fight The Horde!!!” and “Black Syrup” continue on the same path as the opening song “Fat Frog” with plenty of mesmerizing guitar riffs, the monster rhythm section and Staunton‘s distinctive attitude filled vocal delivery, which reminds me somewhat of the singing from Rebel Mistress‘ Marielle Tengström. Unfortunately, there is a bit of a let down with the fourth track “Set In Stone” which while still a pretty good song does not match the excitement and power of the first three tracks. The EP ends on a rather odd note with a rather short slower instrumental piece entitled “Colourless.” Frankly, Novacrow should have just left that instrumental off their EP. That being said, I could see how “Colourless” might be a cool little intro song for what appears to be the rather visually entertaining live show that Novacrow appear poised to deliver.

In Black Syrup, Novacrow deliver a power packed debut EP that is definitely worth checking out if you like a harder edged Halestorm and attitude filled female fronted rock bands.